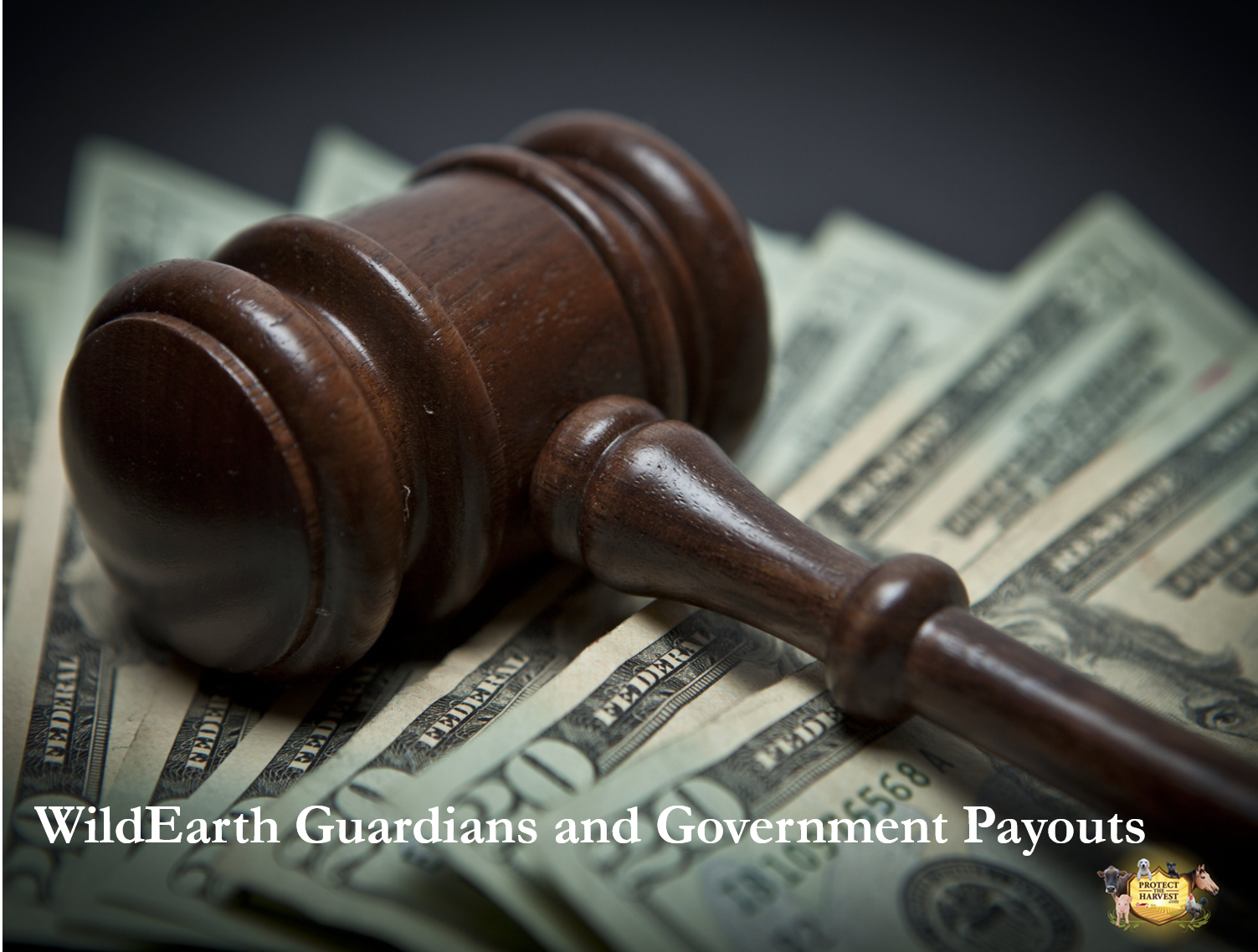 Who Are the WildEarth Guardians?
The WildEarth Guardians were founded in 1989 under the name “Forest Guardians.” Their original intent was to fight a logging project at New Mexico’s Elk Mountain. Over the next several years, they expanded to fight livestock grazing, hunting, multi-use of public lands and eventually merged with Siapu, which was a “carnivore protection” agency, based in Colorado. Essentially, the group intended to protect the wolves and mountain lions in the state, as well as fight to keep them on the Endangered Species List. When they did so, the group’s name changed to WildEarth Guardians. In 2013, the group merged again with Wildlands CPR from Missoula, Montana, and the Utah Environmental Coalition.

WildEarth Guardians Notorious for Litigation
In 2011, the WildEarth Guardians (WEG) were already notorious for their tactics in regard to the Endangered Species List (ESL). In an effort to “protect” species they deemed necessary, they would file petitions to get those plants and animals on the ESL. We are not talking about a few here and there; we are talking about hundreds and hundreds of petitions. So many, that the Fish and Wildlife Service (FWS) is inundated to the point of being unable to process them in a timely manner. According to a New York Times article, WildEarth Guardians and the Center for Biological Diversity filed 90% of the petition listings between 2007-2011.

Backlogging the Fish and Wildlife Service is Counter-productive Unless you are the WildEarth Guardians – Then It is Lucrative
In the same New York Times article, the journalist explained that once these petitions are filed, the FWS has 90 days to decide if a petitioned species warrants further investigation to determine if protection is necessary. If the FWS does not meet that deadline, the petitioning organization can sue the FWS. Additionally, once they determine if the species warrants further investigation, the FWS has 12 months to either list the species on the Endangered Species List or not. If they do not decide within those 12 months, the petitioning organization can sue them again.
Because of the backlog of petitions, the FWS repeatedly misses deadlines. They simply do not have the resources to investigate the sheer number of petitions being submitted in a timely manner. According to the New York Times article, “Gary Frazer, the Assistant Director of the Endangered Species Program for the FWS (2011), said, ‘These mega petitions are putting us in a difficult spot, and they’re basically going to shut down our ability to list any candidates for the foreseeable future. If all our resources are used responding to petitions, we don’t have resources to put species on the endangered species list. It’s not a happy situation’.”

WildEarth Guardians are Rewarded for Their Legal Battles
Each time the WildEarth Guardians partake in litigation against the Fish and Wildlife Service they are being counter-productive to their stated goal. By tying up the agency in the courtroom they are hindering the ability of the FWS to work on making determinations regarding which species should be added to the ESL. What is most egregious is the fact that the WildEarth Guardians have taken advantage of this system for financial gain.
A substantial portion of their income comes from grants from the government. The government gives these organizations taxpayer money, which they then use to sue the government. In many cases, fees are partially or fully reimbursed to them upon winning a case under the Equal Access to Justice Act (EAJA). This is summarized well by the website STRATA: “It seems that EAJA has created a system where groups like WEG jump much too eagerly into legal battles and are rewarded for it. These groups want to see species protected, but the results show that they are backlogging the system, and the money shows that they are getting paid to do so.”
This article in Forbes magazine outlines the “Sue and Settle” racket.
2011 article in New York Times about Endangered Species lawsuits and WEG involvement.

WEG Works to Eliminate Grazing on Public Lands
Karen Budd-Falen is an attorney and now serves as Deputy Solicitor for Fish, Wildlife and Parks. In a report she authored Budd-Falen stated that over the last several years, 400 lawsuits have been filed by the WildEarth Guardians and similar non-governmental organizations (NGOs), targeting livestock grazing permits. The WildEarth Guardians often use a procedural technicality of the National Environmental Protection Act (NEPA) that requires government agencies to study possible environmental effects of proposed actions prior to making decisions. They use an accidental technical error or missed deadline as an opportunity to sue the Bureau of Land Management (BLM). All of this is in an effort to eliminate grazing on public lands. A recent example of this is seen in their lawsuit against the BLM for reinstating the Hammond’s grazing permits in the spring of 2019. They claim that the environmental assessment (EA), which is a document used in decision making within the agency that describes the positive and negative effects a proposal, was not filed in time before the decision was made. In fact, it was.
For more information about the lawsuits brought against the Hammonds in response to their reinstated grazing permits, please follow this link HERE.

Staff Attorneys Inclined to Push Animal Rights Ideology
Nearly a third of the WEG staff and board members are attorneys. Several attorneys on the payroll were trained and received their Juris Doctor degree from the Lewis and Clark Law School. According to Law Crossing, Americas Top Legal Job Site, the Portland-based law school’s animal law department is a training ground for animal rights lawyers. The school is notorious for churning out lawyers from their Animal Law department that follow the animal rights ideology. These lawyers then go to work for environmental and animal rights organizations. Numerous graduates are currently involved in animal rights legislation and litigation. Therefore, it is no surprise then that WEG operates in the way that it does.

WEG Partners with the Center for Biological Diversity and the Western Watersheds Project to Attack Ranching
The WildEarth Guardians, and similar groups like the Center for Biological Diversity (CBD) and the Western Watersheds Project (WWP), have an inherent bias against agriculture in general and ranching in particular. They believe cattle damage the rangeland - despite extensive research proving otherwise. These groups believe the lands belong to the wildlife and that developing it, even to grow food is wrong. They have filed hundreds of lawsuits targeting grazing permits, which are integral to the businesses of many ranching families.
These groups make claims about livestock grazing that are not based on facts. Studies and empirical evidence prove that livestock grazing improves biodiversity, reduces invasive species, and helps reduce wildfire potential on public land. Additional studies have shown that grazing helps improve carbon sequestration in the soil. Carbon sequestration is the long-term capture and storage of carbon from the atmosphere, typically as carbon dioxide.
These non-governmental organizations often work together to attack ranchers, for example the current lawsuit against the Federal Government over the reinstatement of the Hammond family’s grazing permits in Eastern Oregon. They also share members and swap staff. For example, WWP founder Jon Marvel is a member of WEG, and current WWP executive director, Erik Molvar, was a former “Sagebrush Sea Campaign Director” of WEG.

Partner Lawsuits and Projects- Beyond Attacking Ranchers:
WildEarth Guardians and their partners do not stop at attacking ranchers. Over the years WEG has partnered with several different non-governmental organizations (NGOs) in lawsuits on a variety of topics ranging from management practices to land leases and more. In addition to the Center for Biological Diversity, and the Western Watersheds Project, WEG has partnered with; Gallatin Wildlife Association, Animal Legal Defense Fund, Advocates for the West, New Mexico Wilderness Alliance, and Dine Citizens Against Ruining our Environment (Dine CARE).
Below is a small sampling of lawsuits the WildEarth Guardians have filed in partnership with other NGOs. The lawsuits involve various aspects relating to the multiple use of public lands, like livestock grazing and wildlife management practices.
• June 12, 2019 – Filed a lawsuit in federal court in conjunction with Defenders of Wildlife, and Center for Biological Diversity over the lesser prairie chickens.
• June 20, 2019 – Filed a lawsuit against the Bureau of Land Management over land leases in New Mexico. This lawsuit was filed in conjunction with Dine CARE.
• January 29, 2019 - Filed a lawsuit against the US Department of AG Wildlife Services over Wyoming wildlife. This lawsuit was filed in conjunction with the Center for Biological Diversity and the Western Watersheds Project.
• November 26, 2018 – Submitted a petition to the EPA over the USDA’s Wildlife Services Department wildlife management practices. The petition project was done in conjunction with the Center for Biological Diversity.
• August 21, 2018- Formed a coalition with the radical animal rights group – Animal Legal Defense Fund, Center for Biological Diversity, Environmental Protection Information Center and other groups opposing the USDA’s Wildlife Services Department management practices.
• October 17, 2017 – Two lawsuits were filed against the BLM and U.S. Forest Service to block domestic sheep grazing in the Caribou-Targhee National Forest (in Idaho). These lawsuits were filed in conjunction with the Western Watersheds Project and Advocates for the West.
• May 2016 – They partnered with Defenders of Wildlife and the New Mexico Wilderness Alliance and Center for Biological Diversity and intervened on the federal government’s behalf when the State of New Mexico sued to stop the release of Mexican wolves into the state.
WEG’s Affinity for Wolves
After reviewing the many and various lawsuits filed by WEG and their partners, it is obvious that they “throw mud at the wall” to see what will stick in their attacks against ranchers. Our research also shows in addition to WEG’s unreasonable and unfounded bias against ranching, they also have a strong affinity for wolves. Since their inception they have been working to ensure the growth of the wolf population in the U.S, regardless of the fact that wolf populations are plentiful worldwide and that wolves are devastating to native wildlife populations.
Wolves and ranchers have been at odds for decades; ranchers try their hardest to protect their stock from becoming an “easy” meal for a pack. When wolves were reintroduced to Yellowstone, the invisible borders of the national park didn’t keep them in for long. Ranchers soon saw a huge rise in livestock lost to predation. In 2017, Idaho reported that 217 ranches called authorities in just a 6-month period to investigate wolf killings on their stock. Federal authorities confirmed 113 of those cases. Idaho is just one of the seven states where wolves reside in the U.S.
You can read more about the Center for Biological Diversity HERE.
You can read more about the Western Watershed Project HERE.

Protect The Harvest Supports Both Wildlife and Ranching
Protect The Harvest works to inform and educate the public about non-governmental groups that threaten ranchers, farmers, animal owners and sportsmen. We believe it is extremely important for the public to know and understand the tactics of the WildEarth Guardians and their various partners as they work to push their agenda of eliminating ranching and livestock grazing, to fundraise and to collect money from American taxpayers via lawsuits against the Federal Government. We urge the public to educate their friends and representatives about this so it can be stopped.