RANCHING IN THE WEST: SETTING THE RECORD STRAIGHT 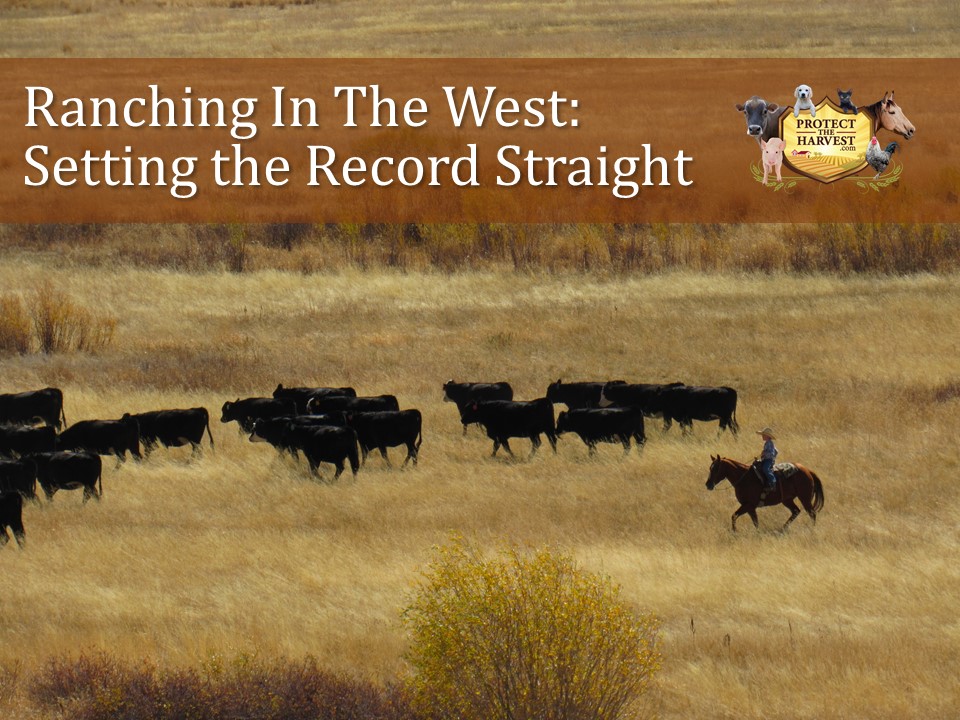 Ranching In The West – It is time to set the record straight.

Who Owns The West?

The federal government owns nearly half of the land in Western states, compared to only 4% east of the Mississippi River. This creates a unique set of issues and challenges for those who make a productive life on the land.

What is most commonly known as “public land ranching” has become a contentious issue in the modern American West. The practice is most accurately called “livestock grazing on federally administered land,” since the rights to the land’s natural resources, such as water, grass, and minerals, were mostly claimed as the lands were settled in the late 1800s. Those rights for use have been passed down, sold, and otherwise transferred among individuals and business entities, and remain in place to this day.

To understand the practice of grazing on federal lands and its role in today’s society, one must first consider the settling of the West and its importance in a developing nation.

Settling the West and accessing its plentiful resources was of great importance in building the United States, but it was a task not suited for the faint of heart. To encourage settlement, the government passed several acts. In this day and age, the immeasurable strength and courage of the explorers and settlers are difficult to even comprehend. A great many of the original homesteaders couldn’t handle the trials and tragedies of frontier life. Those that stayed had a rare combination of determination, skill, and luck that laid the foundation for the West we know today. 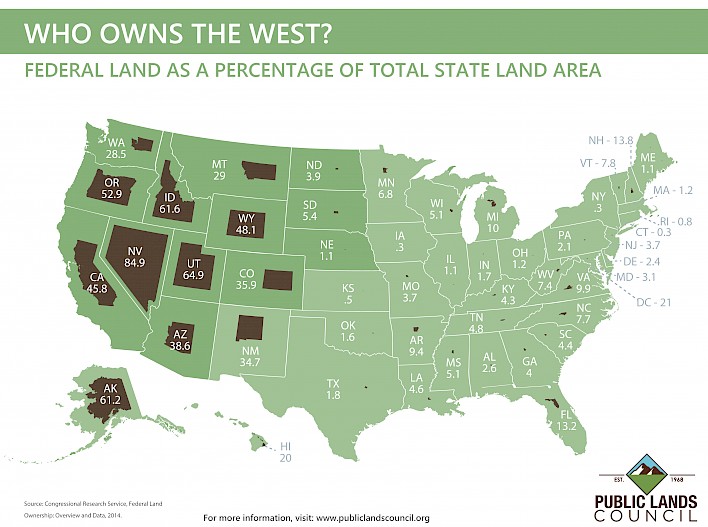 In many cases, the descendants of those families that rose to the challenge of settling, surviving, and thriving in the frontier are still ranching today. This has come at immense multi-generational personal sacrifice that can only be justified by a deep and abiding love of life on the land. For it to be even suggested that they no longer have a place because “things change” is not only a disgrace and a dishonor to the very foundations of our nation, but also a danger to our economic base and food security in an ever-growing society.

Acts By The Government to Encourage Settlement

Several acts were passed by the government at different points in time to encourage people to head West, settle and make the land productive.

This act was signed into law by President Abraham Lincoln. It offered 160 acres to those who would build a home and farm for five years. Settlers also had the option to buy the land after six months for the price of $1.25 per acre. This resulted in 80 million acres of western land being settled and claimed by 1900. If the settlers couldn’t make it for five years, the land reverted to the government to be offered again.

While the 160 acres available through the Homestead Act was sufficient for a functional operation in states with ample rainfall to grow good grazing forage, like Kansas and Nebraska, it soon became apparent that it was not enough land for settlers of arid western states. Thus, the Desert Land Act offered 640 acres. The Desert Land Act of 1877 amended the Homestead Act and specifically encouraged the settlement and cultivation of arid and semi-arid lands in states like Wyoming and Nevada.

Later, the Stock-Raising Homestead Act of 1916 would also offer settlers 640 acres of western land that was deemed of no value except for livestock grazing and the growing of forage. Following the split estate concept, the government retained the mineral rights on those lands. In the most arid parts of the high desert, 640 acres is not enough for a viable operation, and thus, ranchers also grazed unclaimed land near their base properties.

It is important to understand the role of water rights in the settling and claiming of these lands. Many water claims were made prior to land claims under the Homestead Act or Desert Land Act and made all the difference in the ability of a homestead to succeed or fail. Betty Fussell wrote: “In the arid West, which at the beginning of the nineteenth century was named the Great Desert, water is the key to life, liberty, and property, which are more or less the same thing.”

First In Time, First In Right: Prior Appropriation Water Rights

Before water regulations were put in place by individual states, settlers had a well-established system of “first in time, first in right” claims to water.

Even though it is titled the Mining Act, it solidified ranchers’ water rights and land usage. The Act stated that “rights to the use of water for mining, agricultural, manufacturing, or other purposes… shall be maintained and protected.” The law also protects the right to convey water to where it can be put to beneficial use, such as through ditches and canals, as well as a surrounding fifty-foot right of way and forage right. Further, the law states that “homesteads allowed, shall be subject to any vested and accrued water-rights, or rights to ditches and reservoirs used in connection with such water rights.”

In the early 1900’s, regardless of how vested water rights shaped the use of the unclaimed range, the lack of formal organization and regulation of grazing resulted in less than ideal resource management and range wars. Thus, the Taylor Grazing Act of 1934 was passed to bring order to ranching unclaimed land in the west. Grazing districts were created and the land within them could no longer be claimed under the Homestead Act.

Following the Taylor Grazing Act, the Bureau of Land Management (BLM) was created in 1946 with the mission “to sustain health, diversity, and productivity of public lands for the use and enjoyment for present and future generations.” Their multiple use mandate includes:

The Multiple Use Yield Sustained Act (MUYSA) of 1960 and the Federal Land Policy and Management Act (FLPMA) of 1976 specifically reinforce the multiple use mandate for federally managed lands, ensuring that all Americans have a place, whether it be recreational or commercial. As well as countless recreational opportunities, BLM lands carry thousands of leases for gas, oil, coal, renewable energy, minerals, and helium. Currently, the BLM oversees grazing on 155 million acres, with around 18,000 permits.

The United States Forest Service (USFS) is the other federal agency that oversees grazing on federal lands. Its origins date back to 1876 when the United States Department of Agriculture was given the task of assessing forests in the US. After several shifts and expansions, President Theodore Roosevelt placed the care of the forests into the newly formed USFS in 1905. The USFS currently manages grazing on approximately 102 million acres, with 5,800 permits.

With the founding of these organizations, grazing preferences were formally attached to the deeded base properties of established ranchers who were making beneficial use of rangelands, sectioned into parcels of land known as allotments. It is interesting to note that grazing preferences cannot be taken away as long as the rules of the Stock Grazing Homestead Act of 1916 are followed. Removal, reduction, or suspension of a grazing preference is subject to due process.

Grazing Allotments Are Not Free or Low Cost

The fact is that even while ranchers possess the grazing preferences that have been handed down or sold with base properties over the years, they still must pay for use every year and must follow the stocking rates, duration of grazing, and utilization rules of the overseeing agency.

Conditions and circumstances such as drought or wildfire affect whether or not ranchers can turn out, but a good rancher truly does not need outside encouragement to use his grazing rights responsibly; if a rancher damages an allotment, it will affect the ability to turn out in following years and hurt the operation’s bottom line.

The sustainability of grazing on federal lands is easily demonstrated by the fact that the majority of ranchers engaging in the practice are on multiple-generation ranches that have been grazing the same land for decades. In addition, the grazing of federally managed lands has many and varied far-reaching benefits, contrary to common misconceptions perpetuated by special interest groups.

It is common for environmentalist NGOs to state that most or all of grazing on federal lands is done by “big ag” or “corporate ag.” It is important to note that incorporation is just a business structure often utilized by family farms and ranches for business purposes. The USDA classifies family operations as being “organized as a sole proprietorship, partnership, or family corporation.” Family operations make up 96% of farms and ranches in the United States.

For years, environmental extremist NGOs such as Western Watersheds Project (WWP) and Center for Biological Diversity (CBD) have tried to paint the grossly and intentionally skewed picture that ranchers utilizing resources on federally managed lands are “taking advantage”. Nothing could be farther from the truth. As described previously, ranchers pay to use the grazing preferences they already own and they also pay out of pocket for improvements such as fencing, water source maintenance, and weed control. Public lands grazing has numerous benefits for society, the economy, and the environment, contrary to the NGO’s narrative.

Benefits of Grazing Allotments to The Public

Most of the ranches in the West were established by settlers who persevered in the face of unimaginable trials where most people could not. That these ranches remain functional and productive benefits all Americans in a number of ways.

Rural Economies and Resources—Helping to Feed the World

Open Space Instead of Development

Wildlife and Public Use

No matter where livestock is raised and grazed, there are normal challenges like weather and market fluctuations. However, ranchers who graze their livestock on western federal land face additional challenges that are at best unnecessary, but all too frequently dangerous and destructive to the rangeland ecosystems as a whole.

The numbers of livestock on federally managed lands has declined by more than 70% since the 1970s due to a number of factors, most stemming from well-intentioned but convoluted policy change that created “analysis paralysis” within government agencies, stifling management and opening the doorway for environmentalist NGOs “sue and settle” practices.

Learn more about the NGOs and their lawsuits here: https://protecttheharvest.com/what-you-need-to-know/overview-of-environmental-ngos/

The original multiple use intent for federal lands has sadly been lost in red tape and litigation at the hands of environmentalists over the years, at great harm to ranchers, rural economies, wildlife, and ironically, the environment itself. Protect The Harvest supports both federal agencies and ranchers as they work together to restore a true multiple-use balance on federal lands. We cannot afford to lose the West to those who had no stake in settling it, or those who value panhandling for donations over balanced, sound, science-based rangeland management.

Western journalist Andy Rieber wrote: “If American taxpayers value landscapes unbroken and unburned, they should tip their hats to the ranchers. These hard-working men and women aren’t on “welfare.” They are fundamental to the welfare of America’s wide-open West.”