WHAT THE CLOSURE OF THE CIRCUS MEANS 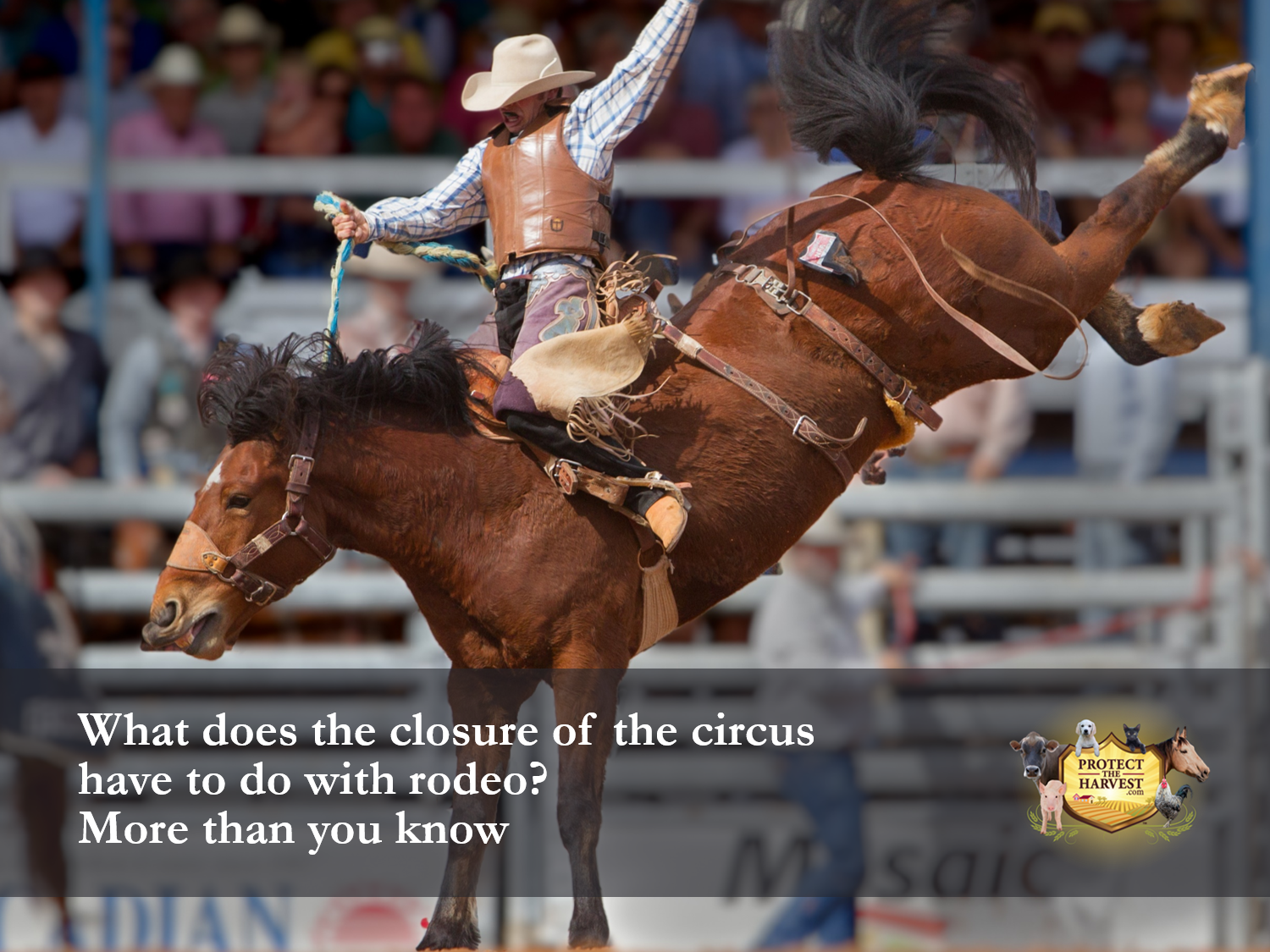 What the Closure of the Circus Means to You

The Reason for Founding Protect The Harvest

The history of Lucas Oil is the story of the American Dream. We founded Protect The Harvest because our American heritage is important, vital and what we value most. Unfortunately, in the last number of years, Animal Extremist groups have influenced our government and legal system, threatening agriculture, animal ownership, land and water use – our very way of life.

These groups have gone after animal exhibitions. They lied about Ringling Brothers and bullied them to close the circus. This is just the beginning of increasing trouble from Animal Extremist groups. If you have followed the story of Ringling Brothers in recent years, it is easy to track the events that lead to this.

The Humane Society of the United States - An Animal Extremist Group

Many people don’t realize that the Humane Society of the United States (HSUS) does not own, run or oversee any shelters. They have been very deceptive in their advertising in order to dupe goodhearted people into giving them money. Instead, they function as a lobbying machine pushing to create laws and regulations that suit their extremist agenda. The attacks on Ringling Brothers are many and varied and come from a number of Animal Extremist groups including the HSUS, PETA, the ASPCA and others.

There are Animal Extremist sympathizers in politics, working to change city ordinances that made it impossible for the circus to perform in those markets. Animal Extremist groups waged ongoing protests and general, constant harassment of the circus. They filed frivolous lawsuits based on false charges that lasted years in length. During the course of this legal battle, it was proven that a false witness was paid $190,000 to lie on the stand. Feld Entertainment, the parent company of Ringling Brothers then brought suit against the HSUS, the ASPCA and other Animal Extremist groups and their lawyers for violations of the RICO statute and Virginia Conspiracy Act, malicious prosecution, and abuse of process. The HSUS, the ASPCA, and other co-defendants paid a combined total of $25 million in damages to Feld Entertainment.

Animal Extremists have a skewed view of reality and what is in the best interest of animals. They are trapped in ideology. In the minds of Animal Extremists, no animal should be owned, used for a purpose or exhibited, even horses and pets. THEY MAKE NO DISTINCTIONS. The real truth, science and facts mean absolutely nothing to them. They have no care or thought for the consequences of their actions. They are not concerned about how domesticated animals, who rely on humans, will survive once they “set them free”.

It does not register with them that Asian elephants used in the circus have worked among people for thousands of years. It is in this same way Animal Extremists also disregard the domestication of other animals, for example, dogs and horses. Draft horses and Shetland ponies were designed to plow the fields and work pulling heavy loads. The Arabian horse was bred for beauty, endurance and the desert environment. Dogs were bred to pull sleds in the snow, to find people, to work as guardians, to hunt, and so on. None of this is relevant to these extremists. It does not matter. They want to end animal ownership. Those of us that exhibit or compete with animals are among their many targets.

The extremists that have been attacking the circus are inter-connected groups. In addition to targeting the circus, these very same groups are the ones attacking carriage horses, pony rides, horse shows, rodeos, dog and cat breeders, animal agriculture, Sea World and more. They feel righteous and now they believe their actions are vindicated by the closure of the circus. This closure will impact animal owners everywhere. They are now pushing legislation in other areas that makes transporting animals for exhibition prohibitive. Make no mistake, horses, horse shows and rodeos are on their list. In some states they are pushing legislation that is so far-reaching, no one will be able to get a dog of their choice and going to dog shows, hunting and field trials will be impossible. It could be a rough ride for all of us in the coming months.

Farming and Ranching Threatened Too

In addition to the attacks against animal ownership, we are quietly losing our ability to provide affordable food for our nation. Farming and ranching are also being threatened by extremist groups in the United States and so are your rights to feed your family. They have successfully written and funded legislation that has made the cost of eggs and other animal products in some states, like California, skyrocket. While this legislation was rammed through on the state level, it impacts interstate commerce as well. With those successes, they have plans to target other vulnerable sectors of agriculture at grass-roots local and state levels. If that isn’t enough, there is even a “think tank” group based in Washington D.C. that is recommending a 40% tax on beef and a 20% tax on other meat products.

Some people mistakenly think that these extremist groups are so radical that they can’t have an impact. Believe us when we tell you they are counting on complacency. The European Nation is a prime example of what happens. Did you know that due to the detrimental effects of extremists, Europe as a whole, is now importing more than 60% of its food? This is a dramatic change since 1997, when at that time they imported only 20%. If you look at those numbers in a different way, in 1997 they were producing 80% of the food they consumed and today, they are only producing 40%.

We Need To Pull Together

We need to protect our nation’s ability to produce food. Farmers and ranchers must be able to make decisions based on science. Instead, America is falling prey to emotional appeals from radical special interest groups who know nothing about farming and raising livestock.

Now more than ever, we need to all come together to stop the animal extremist and environmental bullies. In order to protect our rights to own and exhibit animals, to protect food production and to continue to affordably feed our families we need to take action. We are working hard to inform and educate people about their agenda, but we can’t do it alone. Your help is needed. The first step is to become informed yourself. Read through our website, sign up for our newsletter and then spread the word over your social media platforms. Help us protect your right to ride and show horses, your right to own the dog of your choice, your right to raise livestock and your right to provide your family with affordable food.