WHAT YOU NEED TO KNOW - ZOOS A LIFELINE TO CONSERVATION 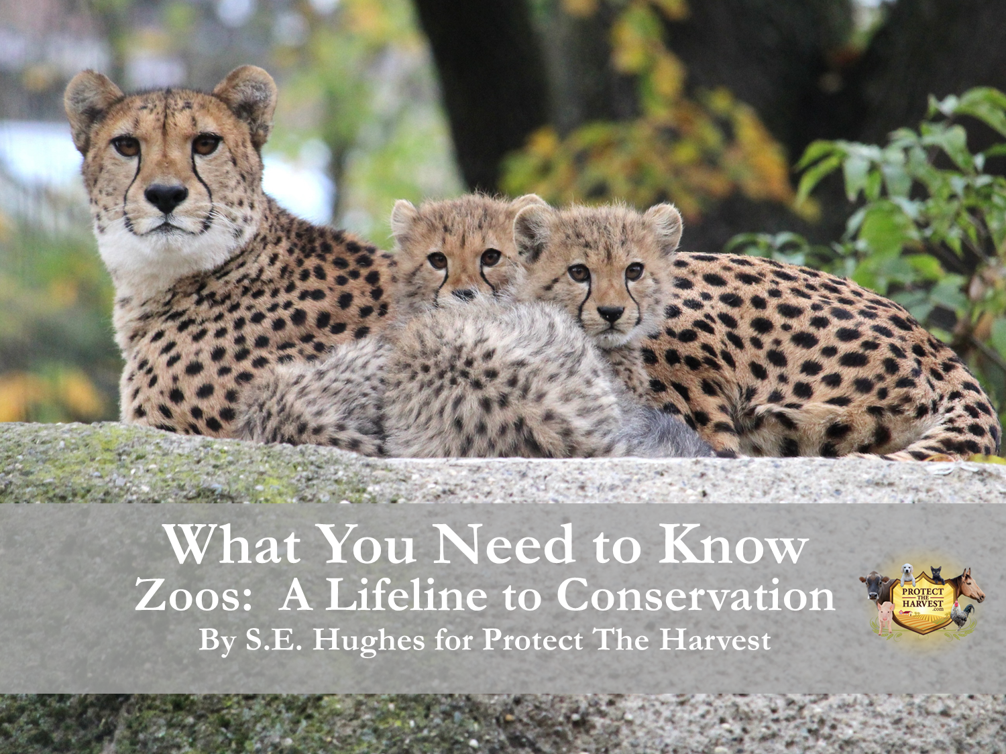 By S. E. Hughes for Protect The Harvest

While some people view zoos as “just an animal show,” today, zoos can be considered front-line support in the endeavor to save our most endangered species through funding, research, creating sustainable populations, and more.

One of the biggest things zoos do for conservation is funding programs in species’ home ranges. Zoos regularly hold special fundraising events that support in situ conservation where endangered animals hold precariously to survival. They also provide venues and hands-on support for conservationists when they travel to the U.S. and other wealthy nations to raise money for their work. Many zoos donate the proceeds from specific gift-shop items to in situ conservation organizations as an ongoing means of support. In total, zoos send millions of dollars to conservation groups every year. They are also able to quickly acquire much-needed supplies, and send blankets, medications and formula to remote conservation groups that rehabilitate injured and orphaned animals, as needed.

Intertwined with fundraising, education is another critical component of what zoos do. Education empowers and inspires people to make personal changes in their own behavior toward animals and this planet and also drives interest in giving to conservation causes. One powerful tool for inspiring people is the use of ambassador animals, hand-reared animals that have been gently acclimated, by specially-trained zoo workers, to being in public. Following strict USDA regulations created to keep everyone safe, zoo workers can allow people to see these ambassadors without the typical distance, glass barriers and fencing between them. These encounters have a huge impact on the public, often fostering a deeper concern for the species as a whole.

On the medical front, research done in zoos allows for better care for animals both in the zoo setting and for rescued animals in the wild. For example, when orphaned cheetah cubs are found and taken to a conservation organization in Africa, workers there feed the babies formula that was developed by researchers in zoos. In fact, milk from an ambassador cheetah was recently collected for analysis in a zoo lab so cheetah milk can be more closely replicated. Actions like this help move the bar toward keeping orphaned cheetah cubs healthy everywhere, and with the total number of cheetahs in the wild at only 6,500 and dropping, every cheetah cub is vital to the species’ survival.

As people move into wild areas, they break up animals’ natural habitat into smaller pieces. Fragmented territory results not only in fewer breeding opportunities for those animals, but also results in them moving through unsafe territories to try to find mates. Those that do not move outside their small range risk birth defects from lack of diversity in that small gene pool. This is one area where zoos’ research into species’ reproductive health, along with breakthroughs such as artificial insemination and in vitro fertilization, offer hope. While not yet ready to be used in the wild, researchers and vets in zoos hope this technology can someday be utilized there, as well. But that cannot happen without the work zoos are doing today.
Because the future looks grim for endangered species, many zoos feel a collective responsibility to try to breed and maintain sustainable populations of these animals within zoos to protect against losing them altogether. Of course, creating sustainable populations in human care is a tall order. It requires much planning and tracking of animals at multiple institutions so that the animals with the healthiest genes are bred, while avoiding any inbreeding that could weaken the population.

There are also occasions when zoo workers with specialized knowledge travel to other parts of the world to assist in emergencies. For example, when the Turtle Survival Alliance confiscated nearly 10,000 illegally-captured radiated tortoises from a smuggling ring in Madagascar, zoos sent staff members to assist in taking care of the sick tortoises so they could be ready for re-release.

Sometimes, zoos’ efforts result in job creation in developing nations. Donations through zoos have paid for trucks, training, and wages for anti-poaching teams, conservation organization staff, and even the training of much-needed veterinarians living in far-flung places.
In short, zoos in developed nations are a lifeline to conservation efforts around the globe—especially for those groups doing critical work in developing nations, where other fundraising streams don’t exist.

As the season of giving approaches, you might want to consider supporting your local zoo, or any of the wonderful conservation organizations that work around the globe to sustain and support species in need. Because extinction is forever, and zoos work hard to educate, inspire, and support conservation everywhere.