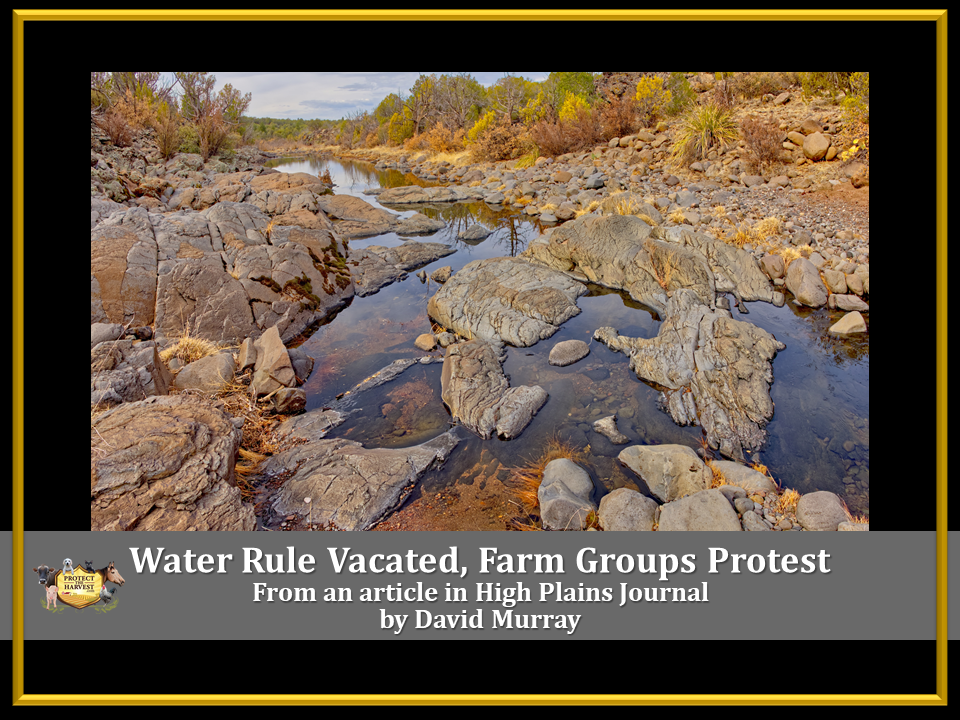 From an article in High Plains Journal by David Murray
Sep 22, 2021

The seemingly endless water regulation wars took another turn in the last week of August when a federal judge in Arizona vacated the Donald Trump administration’s Navigable Waters Protection Rule, which itself had replaced the Barack Obama administration’s widely unpopular “waters of the U.S.” redefinition after a long and contentious process marked by multiple lawsuits.

The ruling came days ahead of the deadline for comments regarding the Environmental Protection Agency’s effort to rewrite the Trump administration’s NWPR. Referring to the ruling of the Arizona judge, American Farm Bureau Federation President Zippy Duvall said, “This ruling casts uncertainty over farmers and ranchers across the country and threatens the progress they’ve made to responsibly manage water and natural resources.” He said the Farm Bureau is reviewing the ruling to determine the next course of action. In the meantime, the Biden administration will pursue its rule redo while current regulations revert to the pre-Obama 2015 standard.

According to Damien Schiff, an attorney with the Pacific Legal Foundation, the vacating of the Trump rule could restore some wetlands to regulation that weren’t regulated under Trump. “Most disputes about the scope of the Clean Water Act were about wetlands,” Schiff told High Plains Journal. “The Trump rule provided a bright line defining wetlands.”

Farmers and ranchers fear a return to vagueness that triggers expensive court battles. On Sept. 3, 14 agricultural groups sent a joint letter to the EPA and the Army Corps of Engineers expressing disappointment that the administration is seeking to replace the NWPR. The groups include the American Farm Bureau Federation, Agricultural Retailers Association, National Association of Wheat Growers, National Pork Producers Council, National Milk Producers Federation, and United Egg Producers.

“Clarity and predictability are paramount. Farmers and ranchers need a rule that draws clear lines of jurisdiction that they can understand without hiring consultants and lawyers. The CWA is a strict liability statute that can trigger substantial civil fines as well as criminal penalties for persons who violate the Act’s prohibitions,” the letter says. Opponents claimed the Obama rule used deliberately vague, non-science-based definitions of what types of water features were subject to regulation, leaving transient puddles and ditches with no connection to navigable waterways open to permitting and regulation under heavy penalty.

Trump opponents claim his water rule weakened Clean Water Act protections. Repealing the Trump NWPR was a priority of the incoming Biden administration. In July, a South Carolina court was the latest of three courts that have refused a plaintiff suit to overturn it. But the District Court of Arizona vacated it while the Biden administration moves ahead with its new process to replace it. In the meantime, water regulations will default to the 2015 standard. What that means is not clear to everyone, however.

The ag groups said, “We were disappointed by the agencies’ recent announcement of their intent to revise the definition by first repealing the Navigable Waters Protection Rule and second refining the pre-2015 definition of WOTUS. AFBF and the undersigned groups feel strongly that the NWPR was a clear, defensible rule that appropriately balanced the objective, goals, and policies of the Clean Water Act.”

As part of the comment process, the groups strongly urge the retention of the NWPR. Failing that, the groups asked that exclusions for certain irrigation and water-channeling structures under NWPR be retained under the new rules.

The ag groups also strongly urged the continued exemption of prior converted croplands as subject to regulation under waters of the U.S. “The NWPR brought much needed clarity to the [prior converted croplands] exclusion by codifying a definition in the regulatory text that is consistent with the 1993 rule. The lack of a clear definition of PCC has presented problems in the past regarding when PCC can be ‘recaptured’ and treated as jurisdictional.”