WATERS OF THE UNITED STATES UPDATE 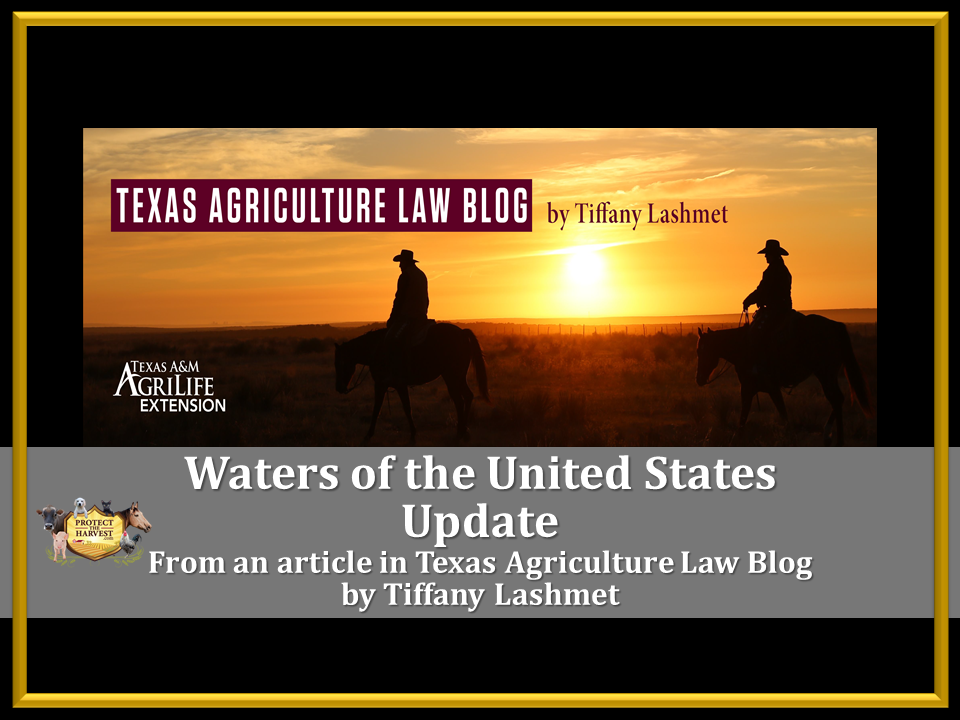 Posted on September 20, 2021 by Tiffany Lashmet

For those of you following along with the ongoing saga surrounding the definition of “waters of the United States” pursuant to the Clean Water Act, there have been several recent rulings and happenings of which you will want to be aware.

The Clean Water Act, passed in 1972, gave federal jurisdiction to the Environmental Protection Agency (EPA) and Army Corps of Engineers (COE) over “waters of the United States.” Essentially, a person who wishes to do certain activities in a water of the United States—such as point source discharge of pollutants or discharging dredge and fill materials—must obtain a federal permit in order to do so. The Act, however, offered no explanation of what was included in the definition of a “water of the United States.” Not surprisingly, this proved problematic.

For the next forty years, it was left up to courts to address this issue. Several times, the issue of whether a wetland, isolated pond, or other water fell within the federal jurisdiction made its way to the United States Supreme Court. This culminated in 2006 in a case called Rapanos v. US Army Corps of Engineers. [Read opinion here.] In that case, the Court had to determine whether wetlands, lying near ditches or drains that eventually emptied into a traditional navigable waterway, were considered WOTUS. In a complicated turn of events, the Court landed 4-1-4. Four justices, led by Antonin Scalia, held that the lower court applied the incorrect standard to determine if the wetlands were jurisdictional and articulated the correct standard as requiring a WOTUS to require a “relatively permanent, standing, or continuously flowing body of water” traditionally recognized as “streams, oceans, rivers and lakes” that are connected to traditional bodies of water. Four justices held the opposite, finding that the proper analysis was to defer to the COE if they reasonably concluded that a wetland may affect water quality of adjacent lakes and streams. Breaking the 4-4 tie was Justice Anthony Kennedy. He issued a concurring opinion where he agreed with the outcome reached by the Scalia group, but not their reasoning. He would analyze whether a wetland was a WOTUS by determining if it possessed a “significant nexus” to waters that are navigable in fact. This opinion offered little clarity, and disputes continued.

In 2015, the Obama administration promulgated a regulation defining WOTUS. The definition was seemingly more broad than prior case law. Almost immediately, lawsuits began pouring in across the United States, claiming that the new definition was overly broad and exceeded the scope of authority granted to the agencies pursuant to the Clean Water Act. Various decisions were issued, several of which found the WOTUS Rule to be invalid. When the WOTUS Rule was replaced by the Trump administration’s NWPR Rule, no additional opinions were issued in these 2015 Rule challenges.

In 2020, the Trump administration published the Navigable Waters Protection Rule, offering a definition of “waters of the United States” that was narrower than that of the 2015 WOTUS Rule. [Read more detail here.] Again, lawsuits flowed into courthouses around the country.

In June 2021, the Biden administration announced that it would be going back to the drawing board in order to craft its own definition. Listening sessions were scheduled and public comment encouraged from around the country. [Read notice here.]

The Pasqua Yaqui Tribe sued the EPA and challenged two Trump administration rules, the first repealing the 2015 WOTUS definition and the second the Navigable Water Protection Rule. A number of parties intervened as defendants in the case. On August 30, the US District Court for the District of Arizona issued an order in the case. [Read order here.]

Next, was the issue of vacatur. The Tribe requested the court vacate the NWPR as part of the remand. The EPA did not seek a vacatur. All of the intervening parties urged the court to reject Plaintiffs’ request. Generally, under precedent set by the US Court of Appeals for the Ninth Circuit, when a cause is remanded a vacatur is also issued. The court looked to the parties claims in analyzing whether a vacatur was proper. The Plaintiffs expressed concern that the NWPR disregarded established science and the advice of the EPA’s own experts. The EPA expressed concerns about whether the NWPR adequately considered the statutory objectives and the impact it could have on the integrity of the nation’s waters. These arguments, the court reasoned, were not mere procedural errors or issues that could be resolved with further explanation. Instead, they involve “fundamental, substantive flaws that cannot be cured without revising or replacing the NWPR’s definition of waters of the United States.” Further, the court noted that without vacatur, there was the potential of serious environmental harm based on EPA statistics showing a number of properties that would be jurisdictional prior to the NWPR definition. Thus, the court relied upon the likelihood that the EPA will alter the NWPR definition, the seriousness of the errors made in enacting the NWPR, and the possibility of environmental harm if the NWPR remained in place on remand all justified the remedy of vacatur.

Thus, the court granted the EPA’s voluntary motion for remand the NWPR rule and vacated the NWPR.

Just two days after the Arizona decision was issued, a Massachusetts federal trial court issued an order remanding the NWPR and dismissing a legal challenge to the rule filed by the Conservation Law Foundation. [Read order here.] The court noted that in light of the Arizona decision, “the most orderly means for me to assist in resolving the larger dispute over the Rule is to remand this case to the agencies and correlatively dismiss it without separately addressing the merits to which the litigation is in an advanced state in the District of Arizona.”

In early September, the EPA published a notice on its website titled “Definition of ‘Waters of the United States’: Rule Status and Litigation Update.” The notice stated that the EPA was aware of the Arizona ruling vacating the NWPR and, in light of that decision, “the agencies have halted implementation of the Navigable Waters Protection Rule and are interpreting ‘waters of the United States’ consistent with the pre-2015 regulatory regime until further notice.” The agencies are continuing with the rulemaking process and intend to draft a “durable definition of ‘waters of the United States’ that is informed by diverse perspectives and based on an inclusive foundation.”

So What Does All This Mean?

For landowners, it means that the Clean Water Act’s definition of “waters of the United States” will currently be interpreted under the pre-2015 WOTUS Rule approach. In other words, it will essentially be back to the approach under Rapanos.

The frustration for landowners lies in the continuing changes that make it nearly impossible for a landowner to know whether his or her property may be considered subject to the Clean Water Act jurisdiction at a given time. Unfortunately, it seems unlikely that the uncertainty and litigation will end any time soon.