In an effort to help find economical and safe solutions to control the numbers of horses on American rangelands, Protect The Harvest created the Wild Spayed Filly Futurity which is held in conjunction with the Reno Snaffle Bit Futurity. Protect The Harvest is on track to host it’s third Wild Spayed Filly Futurity in 2020. Both of the competitions, in 2018 and 2019, were a huge success and reached people nationwide. Trainers, from NRCHA professionals to well-known mustang enthusiasts, participated in the event. The 2019 Championship went to Andrew Steiger and South Steen’s Maggie Magpie with a composite score of 673! This competition demonstrates that the standing surgical spay is a viable and humane option for population control. Since its inaugural year, Protect The Harvest has spayed 33 fillies with no complications associated with the spay procedure. They also hope it showcases these horses in a way that encourages more people to consider a horse from our American rangelands. Episodes showing the trainer’s and filly’s progress throughout the year can be found on Protect The Harvest’s YouTube channel.

Check out this YouTube Video Overview of the entire program 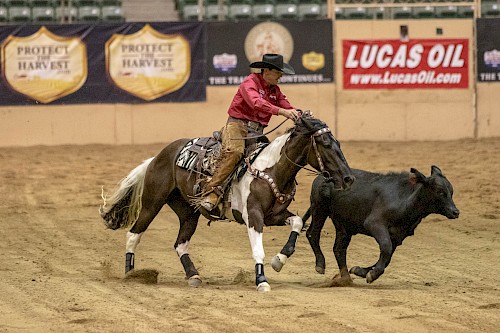 Andrew Steiger and South Steen's Maggie Magpie during their fencework. 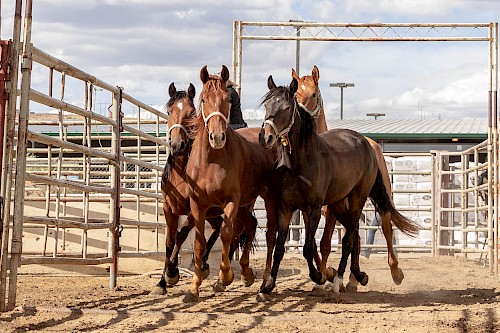 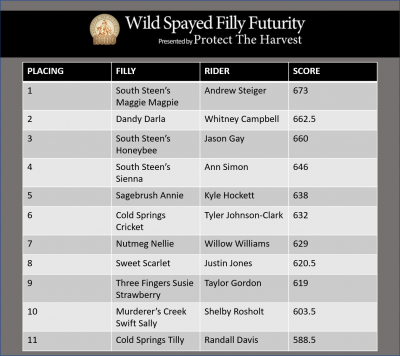 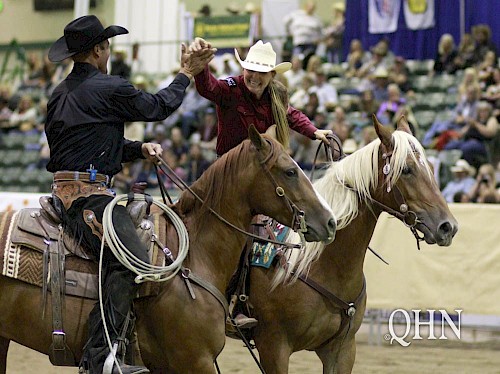 Lance and Rebecca tied for first all three events. Lance's higher cow work score of 226 broke the tie and won him the 2018 WSFF Championship! 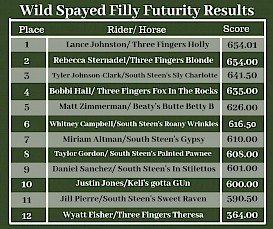 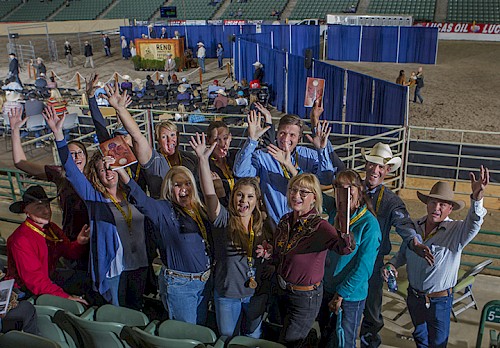 The "Stang Gang" celebrating their purchase of Three Fingers Holly at the 2017 Reno Snaffle Bit Futurity.

Our Goal for the Wild Spayed Filly Futurity:

The goal of the Wild Spayed Filly Futurity is to showcase the significance and abilities of these resilient, tough and beautiful horses. It will also demonstrate their trainability and hopefully encourage more people to consider a horse from our American rangelands. A second and very important goal of the program is to help find economical, safe solutions in controlling the numbers of horses on American rangelands which will allow people to appreciate them in a healthy, balanced environment in the wild.

Protect The Harvest has been a steady advocate for the multiple use of federally administered lands. The extreme over population of the wild horses nationally has decimated wildlife, rangelands and water sources. Over a twenty year period, there have been many attempts to control herd populations by using the birth control drug, PZP. Unfortunately, this method has been proven ineffective, costly, and unsafe when administered.

Even with application of the birth control drug, mares continue to cycle. They are bred monthly by multiple stallions and never settle. Herds have to be gathered and captured annually to administer the drugs, proving to be very costly and ineffective.

The spaying procedure costs a little more than HALF of ONE dose of PZP and is only performed once in a mare’s lifetime, meaning there would be no need for repeated gathering off the range. From the 2019 Wild Horse and Burro Advisory Committee meeting it was reported to cost $521 per horse per dose of PZP. After the spay procedure, mares can be returned to the wild. Once spayed, a mare can safely roam the landscape, possessing all her mare behaviors, as if she was in foal.

Our communication team has been following the Wild Spayed Fillies since the beginning. Their progress has been chronicled on both social media and in television episodes. These television episodes have been aired on networks like: RFDTV and the Cowboy Channel and are now available on our YouTube channel as well. The television episodes and the Wild Spayed Filly Futurity event has reached millions of people with information about the overpopulation crisis on American rangelands. It has also informed the public about the impact on native wildlife, the horses themselves, the ecosystem, and American ranchers. Via our efforts, we have been able to inform and educate people who were unaware of the rangelands crisis.

We were also able to help garner support for a spay study from the public and major groups.

In this episode watch all 12 Wild Spayed Filly Futurity trainers show in their own reined cowhorse division during the 2018 Reno Snaffle Bit Futurity in Reno, Nevada.

THANK YOU TO THE BURNS OREGON WILD HORSE AND BURRO PROGRAM:

Protect The Harvest thanks the Burns Oregon Wild Horse and Burro program for supporting our efforts and working with us to present this unique opportunity benefiting horses of the American West.

For information about other horses available at the Burns facility, follow the link below:

Thank You to Zoetis and Priefert for your continued support of the Wild Spayed Filly Futurity!