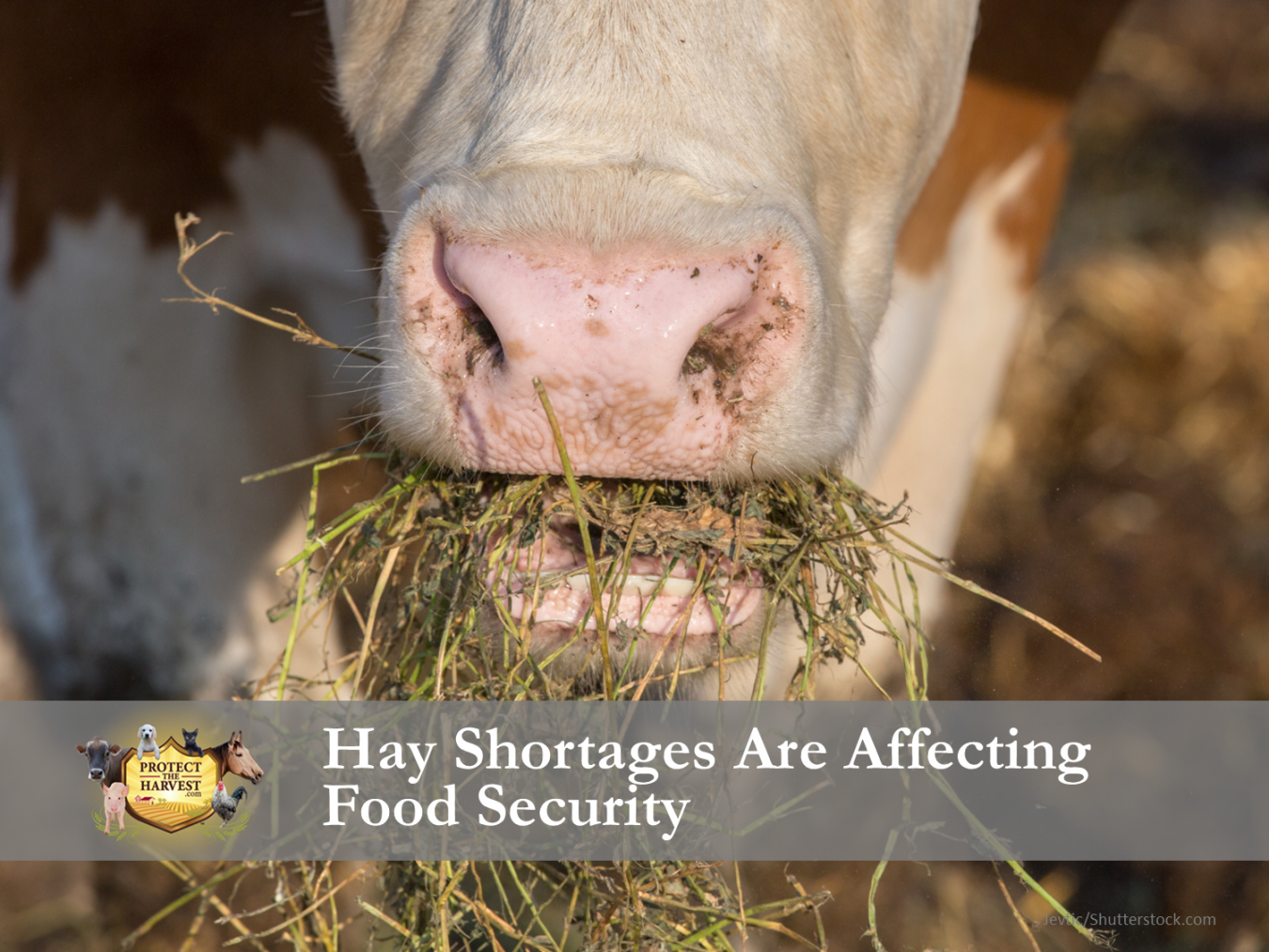 The Importance of Hay

Hay does not feed Americans in the way that other crops do like potatoes, wheat, corn, beans, and other commodity crops. Even though we don’t have hay at our dinner table, its production is vital because it feeds livestock, and that livestock in turn feeds us. Without hay, we find ourselves with a break in the food security supply chain.

Farmers and ranchers across the United States are currently facing a hay shortage due to extreme drought and inflation. These issues have led to increased costs of fuel, fertilizer, and other inputs. The general population may not notice this issue right now, but the shortage of hay will impact our food security in America as it becomes more apparent in the colder months.

The hay shortage will have a three-fold effect. It will first hit the bank accounts of farmers and ranchers who grow and sell hay. Then the shortage and subsequent high prices of hay will impact those who feed hay to their livestock. Already there have been reports across the country of long lines at sale yards where ranchers are selling their herds because they do not have feed available at affordable prices. Lastly, the hay shortage will impact the general population that enjoys a glass of milk or a hamburger. The scarcity and skyrocketing cost to feed livestock will ultimately result in a higher cost at the grocery store.

While some American consumers may be able to absorb these price increases, many will not. Those unable to afford these products will be pushed into purchasing food items that may not be as nutritionally dense as animal protein.

While this may just be another hot summer for some, for farmers and ranchers who grow hay, it has been devastating. Many regions across the country have experienced severe drought this spring and summer. The drought has impacted crop yields because many people who farm rely on regular rainfall to water their crops. To make matters worse, a select few states rely on irrigation, but many of those areas have had their water use cut by governmental policy.

During a typical year, the United States on average (excluding Hawaii and Alaska), gets about 30.21 inches of moisture. This year (2022) we are approaching record lows after the long hot summer across the nation. This lack of precipitation has caused farmers and ranchers to grow less hay because there is simply not enough water. Additionally, hay crops are dying much earlier than they would during an average crop cycle. Ultimately, this leads to a lower yield for farmers and ranchers who have planted and harvested hay this season.

In terms of man-made factors affecting hay production in 2022, inflation caused by policy and the rising cost of fuel can be listed as the biggest. Not only does the high cost of petroleum products affect the cost to run equipment, but it also raises the prices of goods across the board, including fertilizers, herbicides, and pesticides. This year alone, the cost of fuel has risen nearly 60%. Despite news stories reporting that the cost of fuel has decreased in recent months, the price is still more than double what it was last year.

When prices for inputs rise sharply, like herbicides and fertilizer, many farmers and ranchers simply cannot afford to utilize them to maximize crop yield per acre. The high cost of fuel to run planting and harvesting equipment has also caused some farmers and ranchers to leave fields fallow.

According to a study done by John Baffes and Wee Chian Koh for the World Bank, fertilizer prices have gone up nearly 30% since the start of 2022, putting them at a record high. This rise in cost has made it nearly impossible for the average hay farmer to afford fertilizer in order to maximize crop production per acre and yield.

Pesticides that keep crops from being consumed by insects have also spiked upwards in 2022. It appears there is a battle on all fronts for farmers and ranchers as they try to scrape by without losing their livelihoods.

In 2020, the meat and dairy industries took large hits from Covid-19 shutdowns. Since then, food industries have worked hard to recover and start on an upward trend.

However, due to drought and inflation, this year the crop yield for hay is critically low. The hay shortage is impacting the dairy industry and the meat industry (specifically beef) which rely on hay as a food source for livestock.

Meanwhile, the need for hay grows as more food is needed to be produced. Agricultural experts across the country have expressed concern that farmers and ranchers will not have enough hay to sustain livestock this winter. The early sell-off of cattle by many farmers and ranchers and the coming winter will ultimately mean shortages in grocery stores as well as rising prices. Shortages of food products will directly impact foods that make it to dinner tables across America.

Consumers are already starting to see a rise in the cost of beef products. In 2020, a pound of ground beef cost $4.12 on average. In 2022 that number is roughly $4.78 and much higher in many areas. The price hikes have brought us past a $0.50 increase in under two years. At the current rate of increase, the average American family may not be able afford to buy steaks or even ground beef for dinner on a regular basis. Other staple products have also risen dramatically in price.

At Protect The Harvest, we envision a free and fed America. Ultimately it is up to all of us to stop the attack on agriculture in America. We believe this starts by informing you, and then you can take this information to those in your community and inform others. We must be informed before we can protect and respond to these issues.

There are easy steps you can take to make a difference. Signing up for our monthly newsletter, attending county commissioner meetings, and getting to know your politicians are all easy ways to start making positive change in America.

Calls to President to Stop Attack on Agriculture HERE

Articles From Protect The Harvest

Inflation is Eating Your Groceries HERE