Animal owners need to be aware of the true agenda of animal rights groups. It’s time that the curtain was pulled back to expose their beliefs and dishonest fundraising practices that pull in millions of dollars from goodhearted Americans who believe their donations are being used to help animals find good homes. 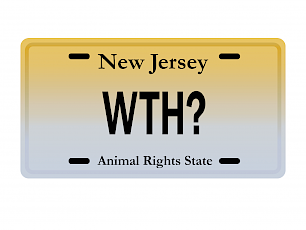 In early 2018, the Humane Society of the United States snuck a fundraising effort through the New Jersey Transportation and Independent Authorities Committee. They attempted to divert funds from the New Jersey license plate that reads “Humane State” to their own coffers. Fortunately, via our educational efforts and a coalition of concerned citizens, they did not get away with it.

The HSUS Does Not Own or Operate Any Animal Shelters 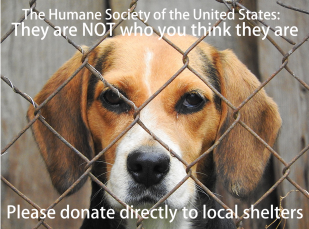 The Humane Society of the United States (HSUS) does not own or operate any animal shelters. A survey has shown that a majority of Americans believe that the HSUS is a national umbrella organization supporting local animal shelters. These same Americans and assume their donations to the HSUS are going to help shelter animals in their communities. They are often surprised to learn that the smallest portion of HSUS’s budget — less than 1% — goes to local or state animal shelters. It is also a surprise for them to learn that when the HSUS does provide grants, it is usually in a small amount $1,000 - $2,000 to pay to advertise spay-neuter campaigns, not to actually help shelter animals find homes or get the care they need.

PETA’s Shelter – Not What You Think

Like the HSUS, the People for the Ethical Treatment of Animals (PETA) is well known for practicing unscrupulous tactics in order to push their animal rights agenda. They believe in “total animal liberation”, meaning that animals should be appreciated from afar and are better off dead than in the hands of people.
PETA is infamously known for its high kill rate in its shelter. According to the website, “Peta Kills Animals”, more than 36,000 animals have been euthanized by the group since 1998. A whopping 95.9% have been killed in one year. The heartbreaking truth about the animals they euthanize is that many are adoptable. The group has been quoted saying, “animals suffer far worse fates than euthanasia, such as illness, pain and not being adoptable.”
Beyond that, they even came under fire in 2014, when PETA workers stole a dog from a family’s home in Virginia and euthanized it the same day. They were fined for not complying with the state’s 5 day grace period and had to pay the family almost $50,000 for the “accident”.

ASPCA – Not What You Think

Like its sister animal rights organizations, the American Society for the Prevention of Cruelty to Animals has amassed millions over the years. According to its income statement found on Charity Navigator, their net revenue in 2016 was $217,398,213. Despite national fundraising tactics, the ASPCA is only affiliated with one animal shelters in New York City. This is problematic for many community shelters and humane organizations because their fundraising activities fool the public into believing their donation dollars are going to provide care for animals in their area. In fact, the State Humane Association of California filed a complaint with the California Attorney General about ASPCA fundraising due to their deceptive practices harming local shelters. Again, like other animal rights organizations, the ASPCA tries to associate itself with saving animal lives when in fact its highest priority is fundraising and pushing legislation to limit the rights of animal owners.

Link to more information about the ASPCA