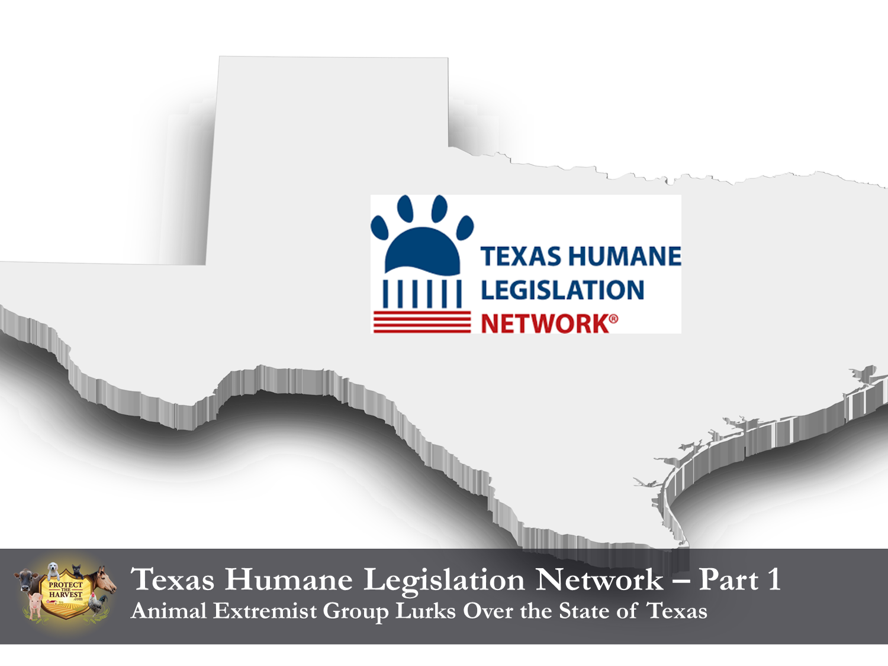 Texas Humane Legislation Network Part One - Who They Are, and Who Their Friends Are

The Texas Humane Legislation Network (THLN) has been a part of Texas for over 40 years. In this three-part series, Protect The Harvest will expose this animal extremist group which attempts to pass overreaching legislation locally as well as its connections to national animal extremist groups. THLN is affiliated with groups like the Humane Society for the United States (HSUS), Association for the Prevention of Cruelty to Animals (ASPCA), Animal Legal Defense Fund (ALDF) and Animal Wellness Action (AWA).

Who IS Texas Humane Legislation Network?

The THLN according to their website, is a 501(c)4 and, “the only Texas-based organization focused on addressing unjust animal welfare laws.” The website states they are working to stop animal cruelty before it starts. This sounds like a good thing on the surface, but a closer look tells a much different story. According to the group Capital Research Center’s InfluenceWatch website: “Texas Humane Legislation Network (THLN) is an animal liberation advocacy group which focuses on legislation involving animal rights in the state of Texas. THLN lobbies and participates in partisan activities, allowing the group to influence legislation in support of its animal rights agenda.”
Upon closer investigation, there are some familiar players within the organization, as well as others THLN plays with in the proverbial sandbox. In addition, there are some similarities between THLN and other animal extremist groups we at Protect The Harvest have written about.

THLN was founded in 1975, originally as Texas Humane Information Network (THIN) when “a handful of concerned advocates from across the state recognized the humane treatment of animals needed to be the law.” Until 1994, the group THIN was more moderate and leaned towards animal welfare, but they had little success with the legislature. This lack of success opened the door to evict then President, Martha Cox, and bring in a more radical group of board members. In a “donation needed” letter from the new, President Louis D. Marks, Jr., he stated:
“As reported in our September newsletter, no animal protection laws were passed by the 73rd Texas Legislature despite the efforts of our lobbyist, THIN board members and volunteer networkers.
In preparation for the 74th Texas Legislative session which convenes in January 1995, the THIN Board of Directors has decided to re-think the organization’s activities and develop new strategy to ensure future successes. Since last October, with the assistance of an experienced business counselor, the concept for a new master plan began to evolve. During 1994, the board’s efforts will focus on goal setting, planning, defining action steps and determining tactics. In other words, our charter is to develop and implement a strategic plan which fulfills and strengthens THIN’s mission – passage of humane animal protection legislation in the State of Texas.”

According to Texas Humane Legislation Network’s website, “Since its inception, THLN has evolved to form partnerships with local animal shelters, animal service agencies, law enforcement and animal advocacy groups.” They are also involved in grassroots lobbying as well as hiring prestigious professional lobbyists to facilitate the passage of dozens of animal protection measures. THLN considers itself to be the, “…only organization in Texas who works year-round to protect animals through legislation.”

It should not be surprising to learn that THLN has current and former staff members who have hopped from one animal extremist group to another. It is also not a surprise that THLN has partnered with other animal extremist groups including American Wild Horse Campaign (AWHC), Humane Society of the United States (HSUS), Animal Legal Defense Fund (ALDF), American Society for the Prevention of Cruelty to Animals (ASPCA) and Animal Wellness Action (AWA).
You may recall that the disgraced former Executive Director of HSUS, Wayne Pacelle, has attempted to reinvent of himself by starting the Animal Wellness Action organization. In fact, up until the sexual harassment claims were made against Wayne Pacelle, the HSUS logo was featured on THLN’s “Partners” page. Since that time, HSUS’s logo is no longer there, but instead, the logo of Animal Welfare Action has replaced it. AWA is using front man Marty Irby (former HSUS) as a puppet to be manipulated by none other than Wayne Pacelle.

According to their website, the Board of Directors at THLN, “…is comprised of individuals who bring their professional talents and animal welfare expertise to the organization to help further its mission for the animals. All work is provided on a voluntary basis. The duties of the Board of Directors include establishing and implementing legislative agendas designed to pass effective animal protection legislation; providing information to the news media concerning THLN issues; informing THLN’s membership of animal-related legislation; increasing membership statewide; working with other organizations who share THLN’s goals; and fund raising to provide the financial resources needed for lobbying, membership communications and media-related activities.”

As with the Board of Directors, the Advisory Board reeks of animal extremism.

THLN’s Cooperation with Other Extremist Groups

After reading through the “cast” of Texas Humane Legislation Network and their “friends and family” it is very apparent that this is a group who has spent the past 40+ years developing their animal extremist strategies. They have formed corporate partnerships, developed an extensive donor list, (their IRS form 990 from 2018 shows a single contribution of $1.5 million dollars and that they had over $2.1 million in publicly traded securities). THLN has successfully crafted legislation that is overreaching in one of the top states in the country for tough animal cruelty laws.

This is Part 1 of a 3 Part Series
In Part 2, we discuss how THLN is influencing the children of Texas against animal agriculture and animal ownership.