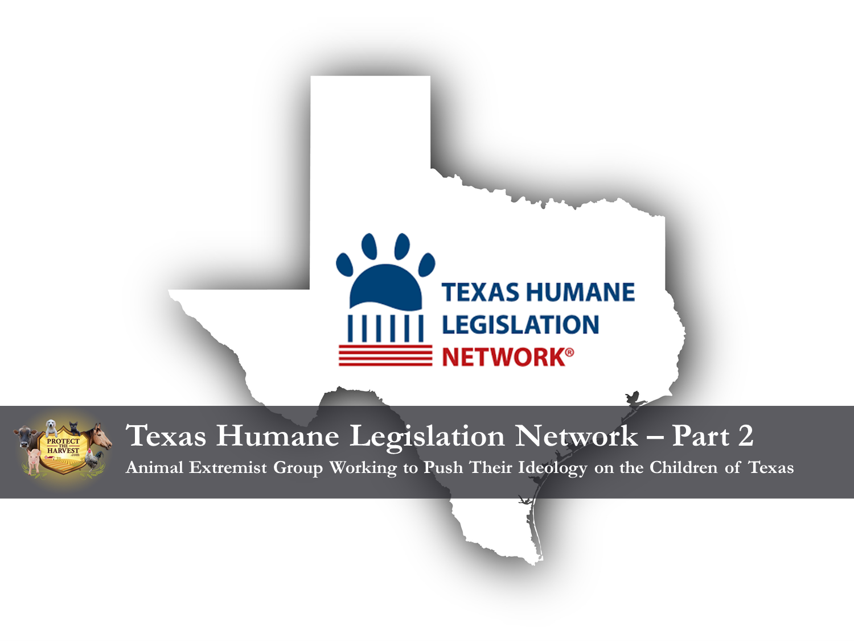 Texas – Did You Know There’s A Group Influencing Your Youth Against Animal Agriculture and Animal Ownership?
Part 2 of 3

Like many other animal extremist groups, Texas Humane Legislation Network (THLN) is not satisfied with only pushing their agenda on the legislators and subsequently the people of Texas. Their activities amount to over-regulation in a state that already has tough animal cruelty statutes on the books. THLN believes it is also their mission to propagandize the youth. They have two main programs for that purpose – the Junior Advocacy Program and the Humane Library Program.

According to THLN’s website, the Junior Advocate Program’s mission statement reads as follows: “The THLN Junior Advocate Program is a youth empowerment and education program that engages young ‘animal welfare advocates’, giving them the resources necessary to take their passion and love for animals and affect change in ways possible for them.”
The program is geared towards children 9-17 years of age and gives them, “…the opportunity to take their passion for animals and affect change in a variety of ways.” THLN Junior Advocates will receive advocacy training and gain a “well-rounded knowledge of animal welfare issues in the state of Texas, meet their legislators and help raise awareness about animal welfare legislation.”

A student must apply to the program and once accepted, the student participates in a 30-minute orientation with THLN. They then must complete the following tasks:

The student will write a three-page paper at the end of the program to describe what they have learned. The student has fifteen months to complete the requirements.

On the surface the program sounds as if it could be educational, especially learning about how government works and how a student can effect change. However, the fact that the program is under the auspices of THLN is concerning in a number of ways, not the least of which is the organization’s ideology. Parents and teachers need to know that THLN is an animal extremist organization and it is propagandizing children with their viewpoint, instead of allowing the parent to teach their child about animal care and husbandry.

The stated goal of THLN’s Humane Library Project is to source “…the best literature for children and young adults on animal welfare and then donate these books to Texas school districts that have high instances of abuse and neglect to help them learn about animals and to develop empathy. An important lesson in empathy is that animals are living beings and should be treated with respect and compassion.”
Again, on the surface the program sounds like a good idea, but since THLN is responsible for sourcing the “best literature,” parents should be very concerned.

The complete list of books can be found HERE

It is not the responsibility of an animal extremist group to tell a parent what books their child should read and these books range from picture books, to chapter books, to nonfiction for teenagers.

Stories Can Be Used to Influence and Manipulate

Some of the titles are classics that tell the story using anthropomorphism like Anna Sewell’s Black Beauty, which dealt with animal cruelty and E.B. White’s Charlotte’s Web. However, others are pushing an agenda that many adults should be aware of because the ideology of animal extremism is to remove animals from human contact.
For example, picture books are suitable for preschoolers and very early readers and yet there are titles that promote veganism (V is for Vegan: the ABC’s of being Kind), alternative holiday practices (A Turkey for Thanksgiving; Twas the Night Before Thanksgiving), and anti-tethering (Buddy Unchained).

Chapter books can range from young readers through high school, and the list of these books also should make parents rethink this program. One book listed for grades 2-5 about “The plight of farmed animals” is Audrey (Cow): An Oral Account of a Most Daring Escape, Based More or Less on a True Story. Paint the Wind is about wild mustang protection and Tua and the Elephant is about elephants in human care.
The nonfiction section really begins pushing the vegan agenda with That’s Why We Don’t Eat Animals, Vegan is Love: Having a Heart and Taking Action, and Allowed to Grow Old: Portraits of Elderly Animals from Farm Sanctuaries. No Shelter Here: Making the World a Kinder Place for Dogs is aimed at 8-12 year-olds and discusses dogs in research and entertainment.

Animal Extremist Ideology Does Not Belong In Schools

These overreaching actions by an animal extremist group to target children is appalling and unconscionable. Projecting one’s personal agenda, or for that matter, corporate ideology, on our youth can open the door to many issues. Pushing a vegan agenda is unhealthy for children both nutritionally and emotionally. Ideological anthropomorphic vegan books tell ranching and farming children that because their family raises cattle for food they must not be “kind.” Anthropomorphism creates a skewed view of the place animals should have in society (personhood for animals). The animal extremist ideology anthropomorphizes animals to the extreme and promotes giving animals more rights than a young child.

THLN obviously feels that they know what’s best, not only for the children of Texas, but also in the legislation they promote. After all, they spend a LOT of money, every year, donating to their “Endorsed Candidates.” Some of these same candidates have shown up on Humane Society Legislative Fund’s list of “Humane Legislators.” These legislators are usually from urban areas and not from farming or ranching communities, yet they purport to know more than those who have studied animal husbandry, veterinary medicine or even soil science.

If you would like to learn about the origins of Texas Humane Legislative Network, read Part 1 on our website HERE.