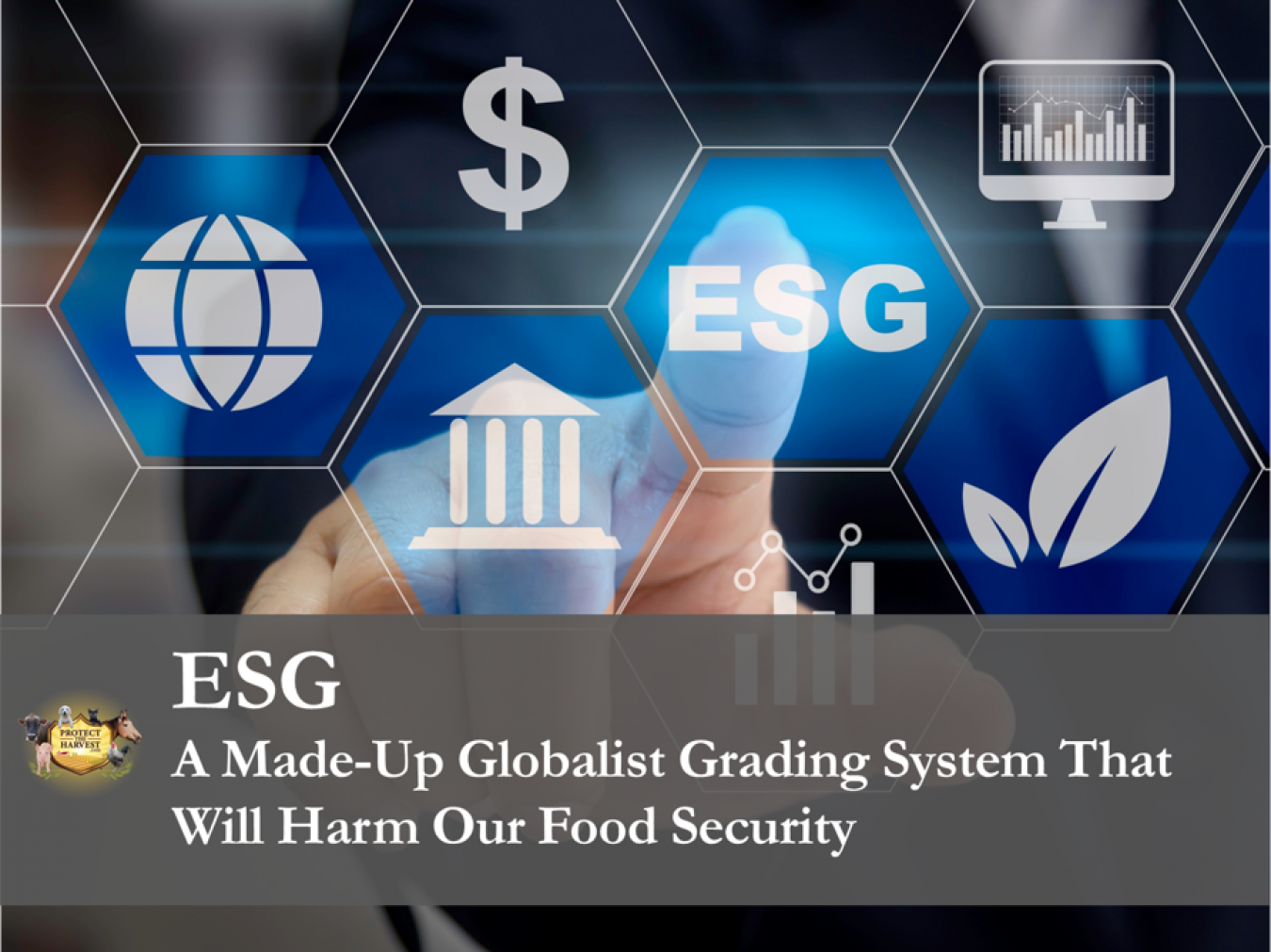 ESG – A Made Up Globalist Grading System

The term ESG (Environment, Social, Governance) has become increasingly prominent in the “green movement.” ESG is a rating system used to score companies based on their performance in the realms of environment, social, and governance. This system is presented under the façade of being a means to hold companies accountable for their practices and to help people invest “responsibly.” In reality, ESG is just another manifestation of the globalist movement, which poses a dire threat to our nation’s food production, food security, and overall freedoms.

The very nature of investing has historically allowed people to invest their money in the way they best see fit, according to their financial goals and/or personally held beliefs. For example, certain religious groups might choose not to invest in companies dealing with alcohol or tobacco. In the 1960s and 70s, the term “socially responsible investing” emerged. This was partially in response to apartheid in South Africa, and for ethical reasons, many investors moved their money away from companies doing business there. However, ESG puts a nefarious, agenda-driven spin on so-called “socially responsible” investing by creating a reward/punishment situation.

This essentially weaponizes financial systems against those that don’t march in step with the globalist agenda.

In 2019, World Economic Forum (WEF) founder and executive chairman Klaus Schwab wrote:
“‘Stakeholder capitalism,’ a model I first proposed a half-century ago, positions private corporations as trustees of society, and is clearly the best response to today’s social and environmental challenges... We should seize this moment to ensure that stakeholder capitalism remains the new dominant model."
The further developed concept of ESG surfaced with the United Nations’ 2006 Principles for Responsible Investment (PRI). Later on, a series of metrics were created and structured to align with the UN’s 2030 Agenda for Sustainable Development.
The fact that ESG and its underlying tenets came directly from the globalist movement is very alarming, especially when the intended trajectory of ESG is revealed.

ESG has certainly gotten a strong foothold in the world of business but is also gaining traction as a means of rating individuals based on their lifestyle choices—just like the social credit system implemented in China. In China’s system a citizen’s ability to participate in society, and even meet their own basic needs, depends on their personal choices and behavior. Merrill Lynch has already started assigning personal ESGs to customers based on their investment portfolios.
This is nothing less than terrifying. In the varying turmoil of recent years, certain protestors and influencers have had their bank accounts locked or had donated funds confiscated because their actions did not align with the ideology and agenda of the powers that be.

There has even been a plan introduced by S&P Global to rate states, which would essentially force businesses to leave states that have “bad” ESG scores, like those that produce fossil fuels, for example. Companies that don’t abandon those states would thus be effectively barred from doing business.

ESG Scoring is Far from Objective

ESG scores are assigned to companies by several third-party research and analysis agencies and firms—most of which have direct ties to globalist interests. The following chart from www.ethics.org illustrates the factors taken into consideration for ESG scores. 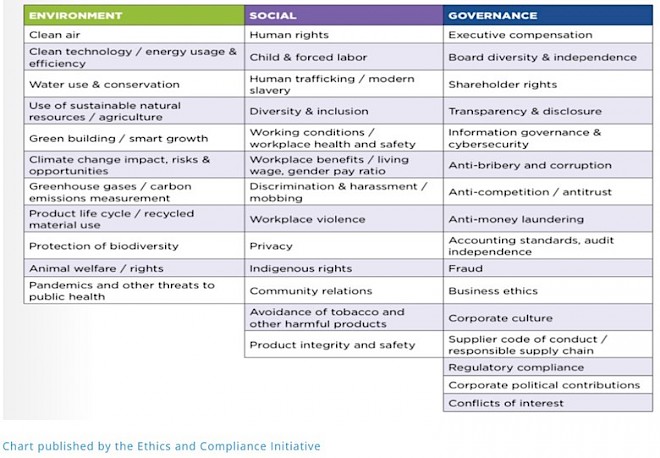 One example of how ESG can be used against people and businesses that don’t align with the agenda is Elon Musk’s electric car company Tesla. The company was recently removed from the S&P 500 index of companies with strong ESG-related performance. This happened during Musk’s contentious bid to buy the social media giant, Twitter, after Musk’s very public criticism of the company for censorship and the suppression of free speech. Despite Tesla’s overall mission and stellar records in environment ratings, the bump from the list was blamed on alleged racism in one of Tesla’s factories, an issue that interestingly hadn’t surfaced before Musk’s move to buy Twitter.

It is easy to see how ESG can be weaponized against businesses and even entire industries. Sadly, American agriculture has fallen into ESG’s proverbial crosshairs.
Farming is already heavily regulated at the local, state, and federal levels. There are also numerous existing programs that facilitate conservation and sustainability. Nevertheless, the US’s Security and Exchanges Commission (SEC) is proposing an ESG-centered rule that would place an immense and unworkable burden on small family farms and ranches. This rule would effectively block them from doing business with public companies and would intentionally undermine the basic structure of American agriculture.

Small Farms Will Be Harmed the Most

Titled "Enhanced and Standardization of Climate-Related Disclosures for Investors,” the proposed rule would require public companies to share the amounts of greenhouse gases their operations emit. This would then trickle down to the small farms and ranches that sell crops or livestock to those public companies.
While large companies have fully staffed compliance departments for matters like ESG, small farms and ranches do not due to cost. Under the proposed rule, the ability of a producer to grow and sell high-quality, nutritious, and necessary products could be negated by the farm perhaps using some older equipment that might not meet newly invented emissions standards.

Rep. John Rose (R-TN), penned a letter to the SEC that has been signed by well over 100 house members. The letter states: “The time and energy put into complying with this new regulation will divert American farmers away from their primary goal of producing our nation’s food, fuel, and fiber.”
Further, the letter states: “Bureaucrats in Washington, D.C. – specifically unelected SEC staff – who have no jurisdiction over environmental policy and who have never stepped foot on a farm should not have such influence over how farmers take care of their land…Imposing these additional reporting requirements could disqualify small, family-owned farms from doing business with companies which could lead to more consolidation in the agriculture industry.”

Indeed, further consolidation and limitation of American agriculture is one of the main goals of the globalist movement. The centralization and control of food production will mean increased control of the people. This leads to food choices being made for you, not by you.

Interestingly, studies have shown that high ESG scores don’t necessarily correlate with better environmental or labor rule compliance. It has even been pointed out by prominent progressive Michael Moore that even while green technology companies might garner high ESG scores, they don’t necessarily provide net environmental benefits. This is partly because green technologies are notoriously inefficient, require rare minerals that must be mined, and rely on tax subsidies.

ESG Aims to Transform Society as a Whole

Justin Haskins is the director of the Socialism Research Center and editorial director at the Heartland Institute. He was quoted as saying: “The point of it (ESG) is to transform all of society, not just to transform what happens inside the walls of some big corporation. They believe that we need to move to a new kind of capitalism, one that doesn't just look at profits and losses and traditional business metrics, but that looks at what's in the best interests of the collective."
The problem is that the definitions of those “best interests” are determined by organizations such as the UN and WEF.

What Can You Do About ESG?

We need to ensure our voice is heard by our representatives on this issue. ESG is going to impact every industry in our country and will hit our small farmers the hardest. Reach out to your state and federal leaders and let them know your opinion. The first step in fighting back is to stay informed and inform others. The more knowledge we have, the more power we have to stand together united for our rights and freedoms.

Article in SPGlobal About the Impact of ESGs on Agriculture HERE