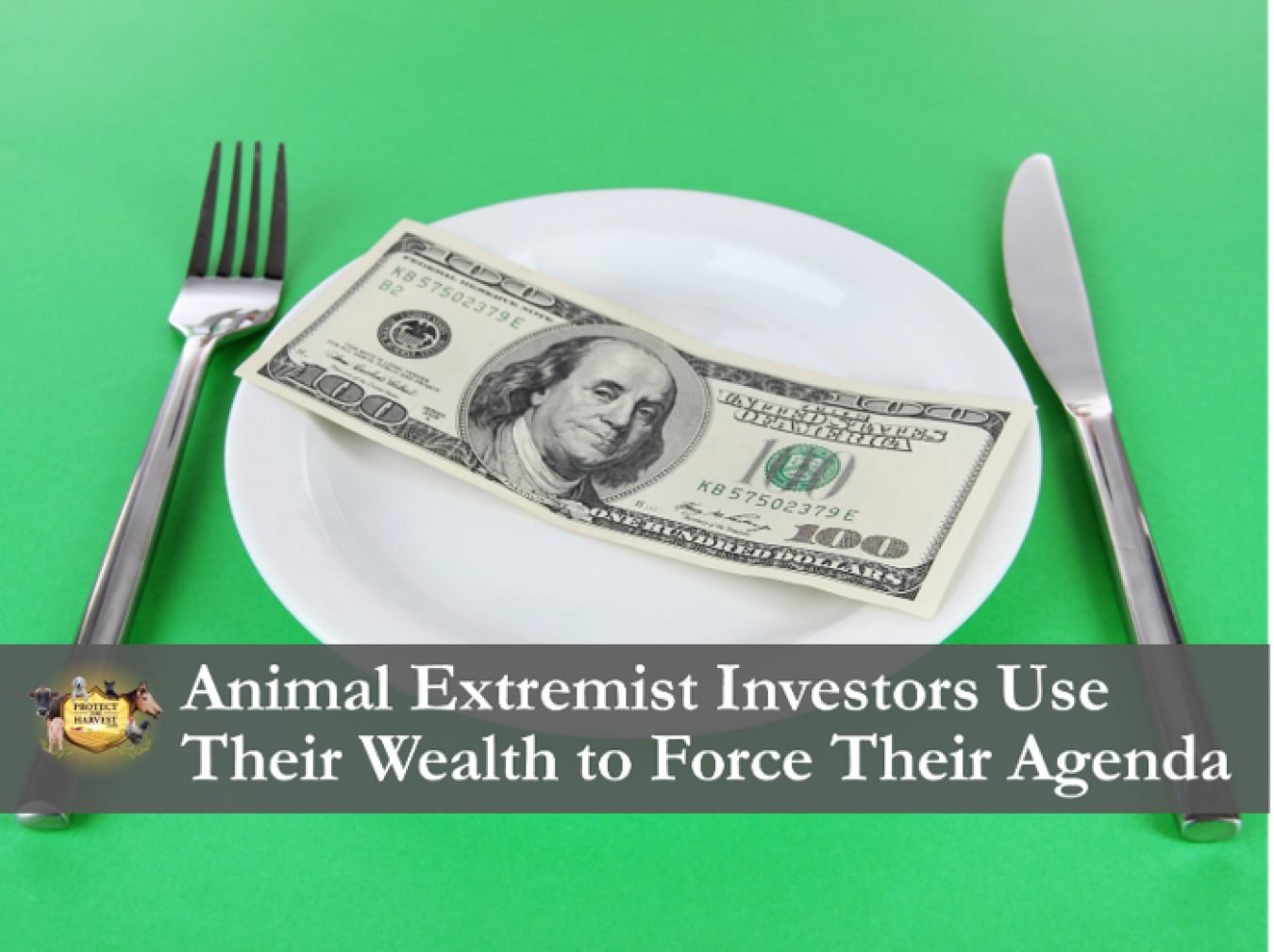 Animal Extremists Have Their Fingers Everywhere

In the last number of years, wealthy animal and environmental extremists and affiliated groups have been pushing hard to implement their ideology and agenda. The ideology is infiltrating into investment capital, retail, restaurants, children’s schools, and even religion. Animal extremists have their tentacles everywhere.

Protect The Harvest has covered the trend of activist investing. Activist investing occurs when extremists use their wealth to harm animal agriculture. As time goes on the activities of these types of investors are having a greater impact. These billionaire activists buy control by purchasing stock in major companies. Then they use their financial position in the company to try to force their agenda.

Think about the last time you drove through a fast-food chain. Were there vegan options being displayed? Chances are there were. This is a new thing that influential vegan extremists have begun pushing into Americans’ laps. Wealthy ideologues are using their wealth and status to influence the American marketplace. The connection to restaurants is obvious. The food we eat comes from both livestock and crops produced on farms and ranches.

The food and restaurant industry leads back to animal agriculture. Animal extremists strive to control not only what we eat but how we eat it. They are accomplishing the control of the food we eat and how it is sourced in a variety of ways.

Carl Icahn is a billionaire investor who is using his money to buy stocks in businesses like the fast-food chain McDonald’s and the grocery store conglomerate Kroger. His goals are to invest in these companies and then use financial leverage to influence their policies with his ideological agenda.

Recently Icahn issued a public letter to McDonald’s shaming their use of pork. In his letter, he claims that they do not get their pork products from ethical sources. He asserts that this is the reason modern pork production practices that he deems unethical are still in use.

These claims are simply not true. McDonald’s is responsible for 1% of U.S. pork production. They were quick to point this out in a response to Icahn’s public letter. McDonalds also pointed out that Icahn is a hypocrite. McDonald’s identified that Icahn was just pushing his extremism in areas that suited his agenda. Here is an excerpt from their response:

“In addition to the financial burden this would place on customers, Mr. Icahn has also failed to address the inherent hypocrisy of his campaign. Mr. Icahn is the majority owner of Viskase, a company that produces and supplies packaging for the pork and poultry industry. Viskase has no public commitments like those McDonald's championed in 2012 and does not limit its business to meet producers who raise their animals in the "crate-free" housing systems espoused by HSUS.”

New Campaign Aimed at Animal Agriculture – Shop With Your Heart

Beyond funding biased studies and investing in large companies to influence policy based on ideology, animal extremism is further working to implement its agenda by directly influencing consumers. Shop With Your Heart is the latest anti-animal agriculture campaign sponsored by the Animal Welfare Institute (AWI) and the American Society for the Prevention of Cruelty to Animals (ASPCA). These two groups have partnered with an ideologically driven app company called “Consciously”.

The impact of farming and ranching on retail is slightly less obvious to most Americans. However, when you look at the tags on apparel it becomes apparent. Materials, for example, leather, wool, fur, and cotton are provided by animal and crop agriculture.

Consciously is an app designed to make “ethical” shopping easy. Consciously promotes a vegan lifestyle. Their app is designed to notify shoppers if companies are “helping or hurting” ideological causes. It has tabs identifying products as cruelty-free and identifying small businesses.

Consciously subscribes to the mindset that any animal being treated like an animal is being harmed. The purpose of their app is to “help” these animals who they claim to be harmed.
They claim that animals are “raised for food” as if raising animals for food is something bad. Animals are being raised for food as they have been for centuries.

The Animal Welfare Institute is best known for its campaign to institute anti-animal agriculture laws and regulations on both state and national levels. These include the Wild Horse and Burro Protection Act of 2022 (H.R. 6635), the Pet Safety and Protection Act (H.R. 3187), and the Animal Welfare Enforcement Improvement Act (H.R. 3277). All of which aim to harm pet ownership and animal agriculture.

The ASPCA is well known for commercials filled with sad animals where they ask you to send them money to “save an animal today”. The ASPCA does not own any animal shelters, instead the money they dupe good-hearted people out of goes towards salaries, marketing, investments, and campaigns to harm animal agriculture and pet ownership.

The ideological attack on the food industry is not solely limited to restaurants and grocery conglomerates. Dr. Gunhild A. Stordalen is a Swedish billionaire and scientist. She sits on multiple boards in Sweden and the UN that actively work against the agriculture industry; Scaling Up Nutrition (SUN), Movement Lead Group, the World Economic Forum (WEF), Stewardship Board on Food Systems, REQ Capital Advisory Board, and the list goes on.

Stordalen formed the EAT Forum under the guise of a non-profit organization conducting “research”. This group conducted a one-sided and biased report on food systems to implement what they consider a healthy diet. This report was published in the medical journal, “Lancet”. It is now referred to as the EAT-Lancet report.

Dr. Gunhild A. Stordalen and the EAT-Lancet report is another way that animal extremist billionaires are working to push their agenda. Based on the ideology of its founder it is clear that EAT-Lancet’s goal is to crush animal agriculture as we know it. They are further supporting their ideology by promoting the “in with the new out with the old” mentality. In this case, the old is animal agriculture which does not need to be diminished.

The EAT Forum claims to have goals of creating sustainable food sourcing through science. The group presented itself as an international forum, but it is a small group of researchers funded by vegan ideology. The EAT-Lancet report has been debunked and criticized by scientists, nutritionists, and other organizations across the globe.

California Proposition 12 is another example of how activists and their affiliated groups are using their financial influence to harm animal agriculture. California’s Proposition 12 is a direct hit to the root of the restaurant and grocery industries. Prop 12 was supported and pushed by several animal extremist groups including the ASPCA, HSUS, and others. It was filed by the wife of a wealthy television producer from Beverly Hills.

Prop 12 did nothing to improve animal welfare. Instead, the writers of the legislation created arbitrary regulations not based on science but based on the ideology of animal extremism. Prop 12 requires that farmers and ranchers in California as well as any out-of-state suppliers to California comply with their regulations.

Farmers have been humanely providing valuable animal protein products to Americans for decades. These new arbitrary regulations will make it very difficult for family-owned farms to stay in business. This proposition was sold to California voters through the idea that they would be eating more “ethically” sourced foods. What is more ethical than food farmed and raised on an experienced, generational old farm?
Prop 12 was passed by California voters in November of 2018. Its passing is due to misinformation as well as false promises made to the consumer.

The Goal is Ideology, Not Helping Animals, the Environment, or Families

Wealthy ideologues like these use their money under the guise of “helping” animals and our planet. In reality, all they do is harm. They will stop at nothing to push their ideology onto the public.
The question becomes: Is there interest in saving the planet and helping people or is it stroking their egos through what they are selling as “good” deeds? `

The best weapon you have against stopping animal extremism from spreading is knowledge. Staying informed of the activities of these groups and individuals is the first step in being able to act and push back. You can make a difference.

Sign up for our monthly newsletter to ensure you are receiving our information about the activities and agenda of these groups.

Check out our information that walks through steps you can take - this is found under our tab “Get Involved” – “Protecting Our Livelihood and Lifestyle”.