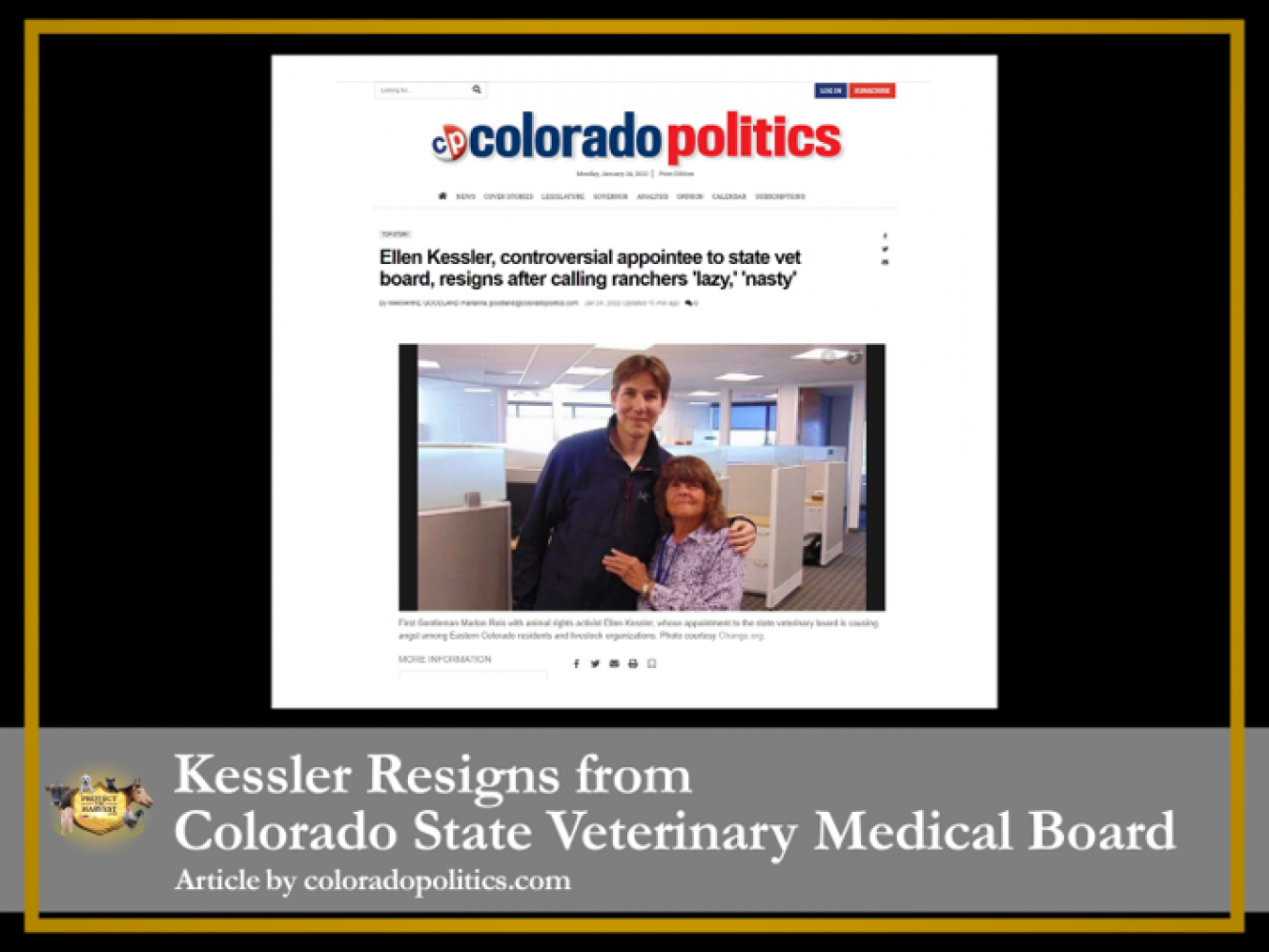 Animal rights activist Ellen Kessler, a gubernatorial appointee to the State Board of Veterinary Medicine, submitted her resignation from the board at 3:26 p.m. Monday.

Kessler's letter, released by the governor's office, said her resignation would be effective at the close of business on Feb. 11.

"I realize that some of my actions have caused anger and discomfort and that I was unprofessional in my judgment," Kessler wrote. "I apologize to you and the citizens of our great state and wish you the best of luck as you continue to make Colorado the best in the nation."

Kessler, appointed to the state vet board in 2020, has earned the wrath of ranchers and farmers for what they view as inflammatory attacks on the livestock industry. She’s a friend of First Gentleman Marlon Reis, Gov. Jared Polis’ husband. Reis is also an animal rights activist.

Kessler was responding to a Jan. 19 post by First Gentleman Marlon Reis, Polis's husband that cited a story from the Missoulian on a new collaboration program with ranchers who deal with grizzly bears.

Referring to recent attacks by wolves on cattle and dogs in northern Colorado, Kessler accused ranchers of using their cows to “bait” wolves in order to receive compensation for the loss of their animals.

“These techniques could easily translate into activism in Colorado for soon-to-be-introduced wolves and other predators already living among us,” Kessler wrote. “Would our lazy and nasty ranchers/cattlemen even raise a finger to make something like this work or is (sic) using a cow to bait the wolves their solution? A living cow doesn’t make money for them. Only a dead cow does. If the slaughterhouse doesn’t pay them for the carcass, they’ll blame the predators so the state will pay them for livestock lost from predators. What a racket. What a scam.”

On Friday morning, Polis, who participated in a virtual meeting with Voices of Rural Colorado, a coalition of rural Colorado organizations that includes Pro 15, Action 22 and Club 20, was asked by two members of the audience how he could keep Kessler on the state vet board after her most recent remarks, according to the Sterling Journal-Advocate.

The governor was also asked why whether someone palpably hostile to the industry should be serving in a gubernatorial appointment.

Polis replied that anyone with a complaint about the way an appointee is performing his or her duty should file a complaint to the Department of Regulatory Agencies, which has oversight over the state veterinary board.

Colorado Republican Party Chair Kristi Burton Brown seized on the controversy Monday to demand that Polis fire Kessler and that Polis be fired, too.

"Today, I'm demanding that Governor Polis do the right thing and fire this extreme, unfit, and embarrassing appointee from the State Board of Veterinary Medicine,” Brown said in a news release. “Rural Coloradans have been under attack by the Democrats for years and it's unacceptable that degrading and false rhetoric about our farmers and ranchers from the Polis Administration should be ignored. While this type of language is now mainstream in the Democrat Party, I know that Coloradans deserve better."

Kessler’s appointment also wasn’t favorably received by the Colorado Veterinary Medicine Association. In a post dated after Kessler’s appointment, the association said some of its members “have expressed concern that Ms. Kessler will cause the state board to direct the veterinary profession in ways that are contrary to the needs of Colorado’s livestock industry.”

“While CVMA respects the effort made to appoint diverse points of view to the state board, CVMA is disappointed in the appointment of a person whose online presence and personal activist activities are not consistent with the professional conduct expected of veterinarians by the board,” the group said.

The group added that its members hold themselves to a high standard and code of conduct, and they are also held to a high standard of professional conduct and integrity by the state board’s veterinary medicine rules and regulations.

"CVMA expects state board appointees to reflect a similar level of civility, respectability, and professionalism," the group said.

Polis has been criticized numerous times for actions the livestock industry claims are hostile, including telling employees at the Colorado Department of Agriculture to look for ways to support meatless alternatives (the department is responsible for promoting Colorado beef through the Colorado Proud program), declaring a "Meat Out" day in 2021, and numerous appointments to state boards and commissions that exclude rural Coloradans, particularly from the Eastern Plains.

The governor's office did not respond to questions about whether he agrees with Kessler's statements or considers her remarks unprofessional.

In a statement Monday, Polis spokesman Conor Cahill shifted the blame to the GOP instead of Kessler, saying he is "deeply offended by Republican leaders rebroadcasting offensive remarks against ranchers."

"Governor Polis was proud to sign legislation that cuts through red tape and supports local farmers and ranchers by allowing for the direct sale of meat to consumers and a new bipartisan law to make historic investments in rural roads and broadband. The governor has appointed many rural Coloradans to important boards and commissions based on their professional and life background, not their social media engagement, to ensure that diversity of voices are represented and he certainly does not monitor the personal lives of his appointments," Cahill said. "Governor Polis is focused on delivering real results for our farmers and ranchers, unifying our state and its people and we are not going to engage in partisan politics or mudslinging that Coloradans are sick and tired of."

Link to article by Protect The Harvest about Kessler's Appointment HERE