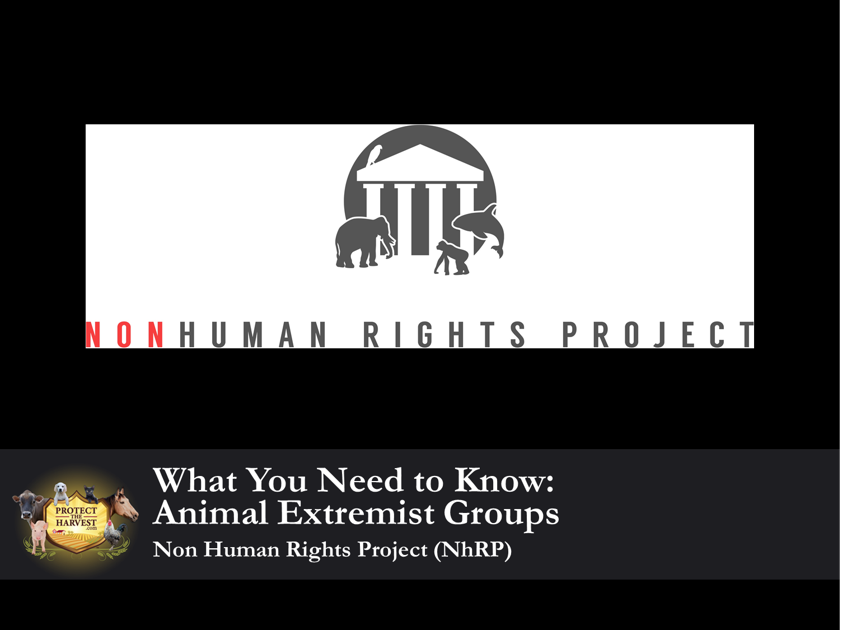 According to their website, the mission of the Nonhuman Rights Project (NhRP) is to, “.. secure legally recognized fundamental rights for nonhuman animals through litigation, legislation, and education.”
This organization is working to change the legal status of animals so that they can achieve “personhood,” affording animals the same legal rights of people. They are working to gain this change in status via grassroots efforts, legislation, and lawsuits. Their website states they are seeking, “…to promote recognition of nonhuman animals as beings worthy of moral and legal consideration and with their own inherent interests in freedom from captivity, participation in a community of other members of their species, and the protection of their natural habitats.”
In short, they want animals to have the same legal rights as people.

Article - Habeas Corpus is for Humans, Not Animals

Article - Anthropomorphism is the Greatest Threat to Animal Welfare

Pushing the Animal Extremist Agenda Inside the Courtroom

Initially, the Nonhuman Rights Project focused on the courts to work to change the status of animals.
The founder of NhRP, Steven Wise, is a lawyer and animal extremist ideologue. Since he is a lawyer, Wise understood the power of legal precedent and has used this to his advantage. NhRP continues to work toward this goal of changing the status of animals by refining their arguments based on legal feedback and by looking for select clients and sympathetic courts in which to file their cases.

Pushing the Animal Extremist Agenda Outside the Courtroom

Even though the Nonhuman Rights Project is mostly known for animal extremist litigation, their activities are broadening in scope. According to a July 2017 interview with Matthew Dominguez, the Animal Charity Evaluators website reveals their activities aimed to forward the animal extremist agenda. Matthew Dominguez is NhRP’s new Director of Public Affairs (who is also past HSUS employee).
“NhRP has expanded their mission and they are now also active outside the courtroom. They are building an infrastructure in order to develop a grassroots movement for their rights-based approach which is similar to those of animal protection organizations. NhRP is also preparing their public policy activities and will soon introduce rights-based legislation at both city and state levels. Currently (before they introduce any new initiatives), they are still doing research, thoroughly vetting the issue, drafting legislation carefully, and building a coalition. For much of the past year, they focused on these activities behind the scenes so that when they finally introduce their first piece of legislation, it has a high probability of being passed.”
“NhRP will choose the best cities and states in which to begin their legislative initiatives based on demographics, local support, and in-depth research into the most promising places. The grassroots campaign has already grown by at least 50% in the last six months and will continue to do so. For the remainder of 2017, NhRP’s public policy department will focus on building a well-trained grassroots “army,” implementing a new advocacy-focused software platform, and developing legislation that will be introduced in 2018.”

With any organization, learning about the team can tell you a lot about their culture and agenda. The Nonhuman Rights Project is no different. Team members have deep roots both in animal extremist ideology and in environmental policy.

A lawyer, Steven Wise has spent the majority of his career immersed in the animal extremist ideology and agenda after reading Peter Singer’s “Animal Liberation.” He is the Past President of the Animal Legal Defense Fund and has ties to the Humane Society of the United States as a contributing author in their publications. Wise has taught animal extremism courses at a number of law schools; Harvard Law School, Vermont Law School, St. Thomas University School of Law, and John Marshall Law School.

Matthew Dominguez also has ties to other animal extremist groups. Dominguez was the past HSUS Director of Public Policy and worked on the HSUS Farm Animal Protection Campaign before joining NhRP.

Schneider earned his law degree from Florida State University in 2013 with a specialization in environmental and land use law. Schneider isn’t simply interested in animal extremism and granting personhood to animals, he advocates for plant-based diets and reforming the food system.

Courtney Fern has other ties to animal extremist organizations as well. She was the California State Director for the HSUS and recently worked for the animal extremist group, Last Chance for Animals. Additionally, like Schneider, Fern has had her fingers in environmental regulations working as a law clerk for the United States Environmental Protection Agency (EPA) and as a legal fellow at the National Resources Defense Council (NRDC).

Mathews has over 20 years of experience working in the animal extremist industry, including groups like Farm Sanctuary, the Animal Legal Defense Fund, and the ASPCA. Erika is also involved in the aggressive and relentless campaign against New York Carriage Horses.

Article - Habeas Corpus is for Humans, Not for Animals