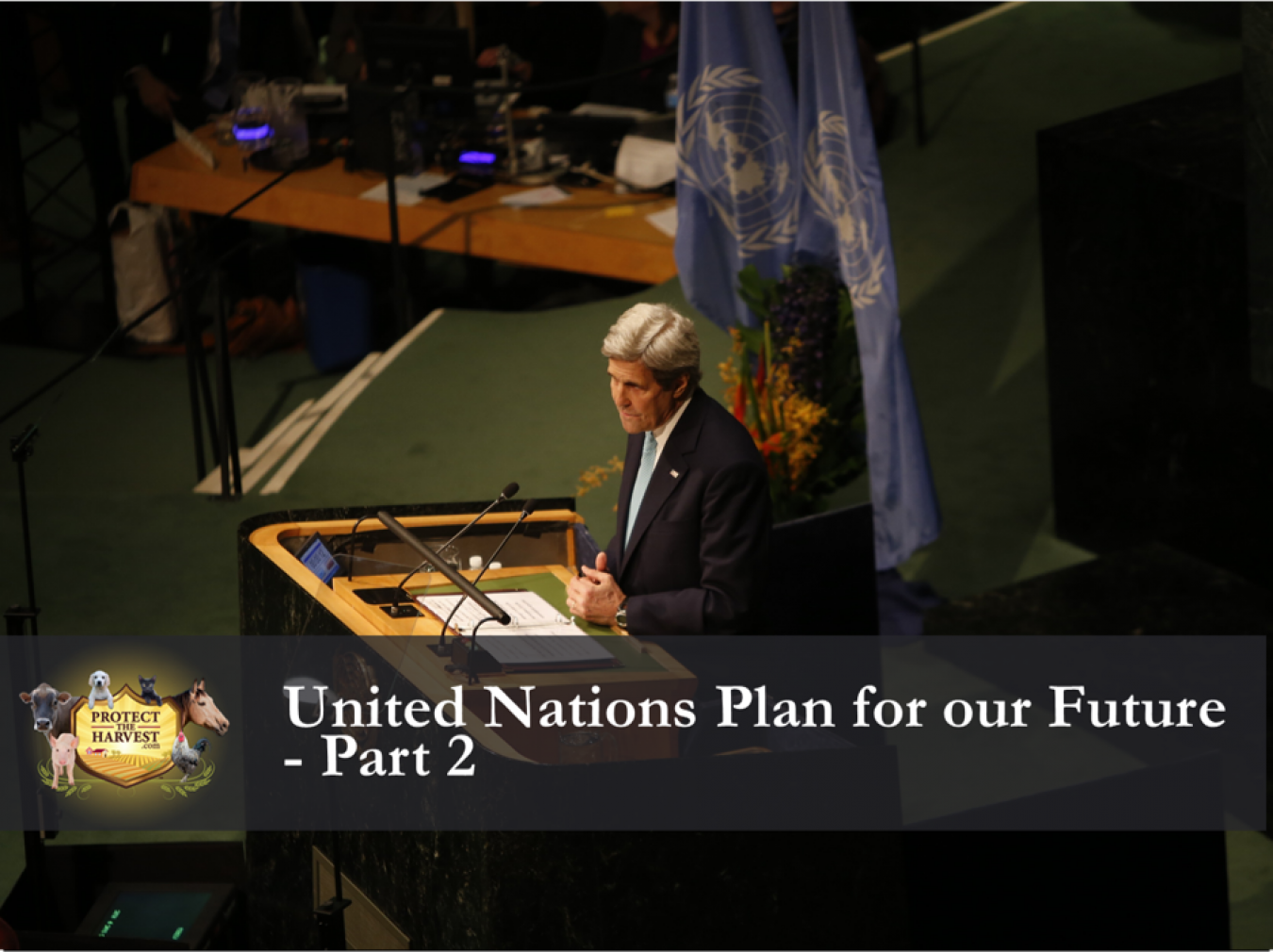 Mastermind of the New World Order, Maurice Strong, led the United Nations Earth Summit in 1992 in Rio De Janeiro, Brazil. He spoke of, mandated, and set into motion a plan to change the world to a singular global socialist government without the consent of a single citizen of any country. In fact, he’d rather the world’s human population was decreased to 10% of its 2021 levels. Strong put forth the idea to “re-wild” 80% of the lower 48 United States and other industrialized, wealthy nation states. This radical idea this was just the beginning.

Environmental protection groups are constantly lecturing the public about lowering their carbon footprint and “healing” the environment, but continually set unattainable goals like those set forth in the Paris Accords. They suggest that carbon emissions should be reduced by 2% when world renowned and respected scientists agree that only .8% reduction is even possible. Climate Change is a controversial topic and while most people agree that the climate is changing; the argument lies within how much change is affected by human impact and what can be done to mitigate the change. 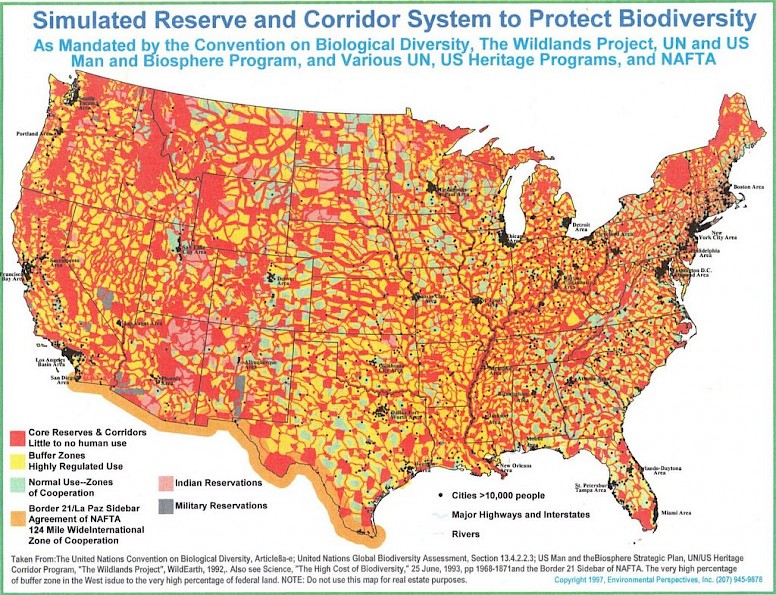 The map depicted with this article shows a mostly red and orange overlay of the continental United States. According to the Rio Accords and folks like Strong, the areas in red or orange should have little or no human use. Do you live in one of those areas? How will the UN remove you from your property that you have worked for your whole life? They have planned and are actively doing so by using grass-roots efforts and government overreach. The grass-roots efforts are often accomplished by using non-governmental organizations (NGOs) that can impact local policy.

Restriction of Public Movement is a Hallmark

One of the hallmarks of the UN’s Rio Accords is to concentrate populations and restrict human movement to government-controlled transportation like light rail, city busses, or even walking and bike riding. Smart growth policies adopted in these cities force developers to have a certain percentage of their surface space be covered by landscaping. When renovating buildings, parking is often removed or decreased. This can make it difficult for residents and increases the appeal for public or self-powered transit. An increase in pedestrians and bicyclists drive municipalities to prioritize larger bike lanes and sidewalks. These changes reduce driving lanes and decrease speed limits to ensure public safety. Motorized vehicles become the enemy of Smart Growth lifestyles.

Policies set forth by NGOs like ICLEI are all around us. It is very interesting to note that on ICLEI’s website they don’t actually tell you what it stands for. They list the title of their website as “ICLEI – Local Governments for Sustainability.” That does not fit with their acronym. It isn’t until you search further that their true name is revealed – International Council for Local Environmental Initiatives. The word “International” certainly puts a different light on their true function. ICLEI lists over 2,500 local and regional governments as members and “committed to sustainable urban development.”

NGOs like ICLEI, aren’t always groups that promote paper straws and ban plastic shopping bags. If you know what you’re looking for, they become easily recognizable. Building policy guidelines like Smart Growth have been adopted in most medium to large cities in first world countries across the globe. In new construction and rehabilitation of older structures around city centers, developers are encouraged to use multi use models where light retail occupies lower levels and upper levels are reserved for residential use. This lifestyle is popular among recent college graduates and younger generations; easy targets to adapt to fewer freedoms and more governmental control.

Municipalities often use groups influenced by ICLEI’s standards to set forth guidelines for developers. One such group is US Green Building Council. USGBC stated, “At USGBC we’re committed to transforming building. Because we believe that every person deserves a better, more sustainable life.” Vague mission statements like this give groups influence that leak over into human services

Clicking through USGBC’s website, one will find several standards and certifications available through this NGO. One such group of certifications is LEED, or Leadership in Energy and Environmental Design. LEED offers feel-good certifications that municipalities often require to develop in their cities. If certifications cannot be met by their standard of net zero carbon emissions, organizations like LEED and USGBC will offer developers carbon credits. Carbon credits are paid for by the developer and these organizations state that they use the money for things like planting trees or purchasing open space. What this amounts to is a redistribution of wealth. There is no accountability required, and often the projects this money is spent on aren’t up for debate. They are spent at the sole discretion of USGBC and similar organizations. This is just one example of taxation without representation and dismissed as the cost of doing business

While reading through LEED’s website, we were equally concerned about certifications offered to public schools. They offer a course titled, “Prioritizing Healthy Schools: Bringing an Intentional Health Process to School Design and Construction.” Objectives of this course are stated as:
1. Identify relevant internal stakeholders for school health and well-being promotion.
2. Establish school health and well-being goals based on the needs of their relevant population.
3. Prioritize strategies that promote health and well-being, as well as “hardware” and “software” approaches to school building design and construction.
4. Learn the importance of monitoring and evaluation strategies pertaining to school health promotion, as well as gain a greater understanding.

Objective three is particularly concerning. This is a NGO whose standards are used by municipalities as boilerplate development guides, that have now inserted themselves into your child’s health. There is no question that children need breaks and playtime during their school day, but where will the intervention of these NGO’s into your child’s life, stop? To be clear, these are only building standards but use the word “health” multiple times throughout this course’s description as the end goal. It starts with playgrounds and open spaces but what guarantee do we have they will stop? Will students be subjected or included in reports or studies to prove that health standards have been met after LEED certifications have been achieved? These organizations only contribute to Maurice Strong’s (author of the Rio Accords) desire for less personal freedom and more government control.

The biggest issue with groups like USGBC and their LEED certifications is that they also engage in activities that restrict personal freedoms and hinder property owner’s rights. Money gained for carbon credits is often coupled with organizations that secure private property through means such as eminent domain. Fair market value is often usurped through lengthy and costly court cases that often end in property owners simply giving in because they have exhausted their personal resources in an attempt to retain property they’ve built and paid taxes on, often times for generations.

Some restrictions on property owners’ freedoms are more flagrant. An example is the designation of 30% of Ventura County, California that is to be overlain by wildlife corridors that will restrict farmers and ranchers from common and historic agriculture uses without approval of an oversight board. Farmers and ranchers have long been innovative stewards of the land and without argument, have offered wildlife and protected species open spaces to roam and flourish. However, those who agree with the United Nations movement toward a more socialist world and espouse the goals of the Rio Accords want more control over land and resources. Ventura County landowners have filed a lawsuit against the Ventura County Commission for illegal takings of property. We have a number of articles on our website if you are looking for more information on this ongoing issue. Click HERE to learn more

Goals of the Rio Accords

Strong was smart to start small and vague and expand his vision as the world progressed. Initially, the Rio Accords stated four goals:

All four goals were generally agreeable to any humanitarian, philanthropist, and affected person. In 1992 there was a consensus opinion that the world should move forward with these goals in mind. Problems with these goals began to surface when they redistributed wealth away from citizens and into the hands of NGOs. The UN’s encouragement signor states to remove private property by imminent domaine claims, impingement on private property rights by conservation easements, unattainable development standards, and the affirmative action-like social programs giving deference and privileges to groups by suppressing others.

As the years turned to decades after the Rio Accords were signed, the UN was sure to up the ante on their original four goals turning them into seventeen newly unattainable standards. They include:
No Poverty, Zero Hunger, Good Health and Well-being, Quality Education, Gender Equality, Clean Water and Sanitation, Affordable and Clean Energy, Decent Work and Economic Growth, Industry, Innovation and Infrastructure, Reducing Inequality, Sustainable Cities and Communities, Responsible Consumption and Production, Climate Action, Life Below Water, Life On Land, Peace, Justice, and Strong Institutions, Partnerships for the Goals

The seventeen goals were trotted out in their entirety and adopted again on the global stage in December 2015, now known as the Paris Accords. On the UN’s website focusing on Sustainable Development, the following is stated:
“2015 was a landmark year for multilateralism and international policy shaping, with the adoption of several major agreements:
• Sendai Framework for Disaster Risk Reduction (March 2015)
• Addis Ababa Action Agenda on Financing for Development (July 2015)
• Transforming our world: the 2030 Agenda for Sustainable Development with its 17 SDGs was adopted at the UN Sustainable Development Summit in New York in September 2015.
• Paris Agreement on Climate Change (December 2015)

Now, the annual High-level Political Forum on Sustainable Development serves as the central UN platform for the follow-up and review of the SDGs.”
The celebratory tone and tenor of the excerpt above shows their faith in the momentum of the original four goals as a global, socialist movement.

It is important to remember that the Rio Accords and Paris Accords are not law; they are strictly a Statement of Intent. There is no legal obligation to adopt these principals and no penalties for not acting on commitments made. Of the 178 original signors to the Rio Accords, the United States is easily the most cooperative and benevolent. As discussed, most major cities in the United States have some form of Smart Growth easily visible as publicly funded alternative energy sources, mixed use developments, streets reduced to one way traffic, along with widened bike lanes and sidewalks.

While the United States is performing the lion’s share of the work, China, India, and many eastern block nations continue to pollute the environment and suppress entire populations without any pushback from the United Nations. Fairness and equality were not and never will be the goal.

The goal has always been to control the world’s wealth, resources, and population and the UN is making massive headway under the Rio and Paris accords. If you are concerned about this issue, get involved in your local government. Find out if your representatives are informed on these issues and find out where they stand. The only way we can change this is to be the change. It all starts with each of us becoming educated and educating others in our communities.