Prop 12 in California Aimed Against Animal Agriculture and Families

Mid-term elections in California dealt a heavy blow to the agricultural industry, one that will be felt by other states as well. Proposition 12 passed with over 60% approval on November 6th, 2018 and effectively pushed more regulation onto producers by banning the sale of any veal, egg or pork that does not meet the minimum requirements in the state of California. Furthermore, if another state does not meet California requirements, they will be banned from selling their produces in California as well.

This will undoubtedly have a negative impact on the veal, pork and egg industries. However, the effects will also be weighing on the shoulders of the public. This law will create many problems:

How Did HSUS Get This Prop Passed?

Prop 12 was written, funded and marketed by the Humane Society of the United States. It was passed by an alarming amount of votes because the HSUS used their typical deceiving tactics to push people into voting, “yes.” The Prevent Cruelty California Committee, along with the HSUS, raised over 13 million in funds to campaign for this proposition. They also paid people to gather enough signatures in order to get the proposition onto the ballot; the cost to get the required signatures - 365,800 total, was reported at $2,199,613.72.

Is this Law for Animal Welfare?

The truth is that this law will have a negative impact on animal welfare. This was proposed by people who do not have experience raising livestock. The Humane Society of the United States is based in Washington D.C. and the California resident who filed it is married to a television producer and has a home in Beverly Hills. If they did have experience raising livestock, they would know that this initiative would actually decrease the quality of life for these animals. Farmers and ranchers have their animals well-being at the highest priority. These practices: i.e. gestation crates and hutches were created to improve animal welfare and to allow the farmers to tailor the care to the specific needs of each animal. The organizations that are behind "Prevent Cruelty California" have a very specific agenda. They are not interested in animal welfare; their true goal is to end all animal ownership, especially any animals being raised for food.

There are significant welfare consequences that the animal rights extremist groups are ignoring. "Cage-free" farming and eliminating stalls does not equal a better product or an improvement in animal welfare. 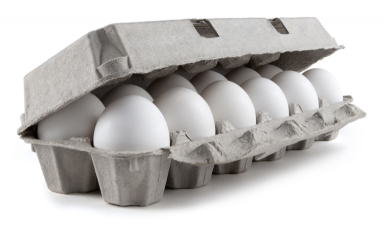 Chickens kept "free-range" are more prone to diseases, parasitic infections, and being attacked by other birds. The Coalition for Sustainable Egg Supply's study found that cage-free chickens have higher rates of cannibalism, aggression, mortality, and keel damage. There is also a significant concern regarding indoor air quality, which poses an issue for both the workers and animals. The same study also reported that the total capital cost for a dozen eggs was 179% higher than conventionally raised chickens.

Sows naturally isolate themselves from their groups and set up a nest before farrowing (giving birth). In studies, wild sows will travel up to 1-4 miles away and stay isolated for up to 10 days. Other than occasional foraging for food, sows remain very inactive during that time due to the fact that pigs only produce milk for about 15 seconds every 45 minutes. Gestation and farrowing crate systems were created to keep the sow and piglets as healthy and safe as possible; just like the sow would keep them isolated in the wild.

Veal stalls and hutches allow the farmer to pay more individual attention to each animal so they can monitor feed intake and health. Stalls and hutches also keep food sources clean, which prevent fecal contamination and disease transmission. They allow the farmer to react as soon as they see an issue instead of waiting until the calf is blatantly ill.

All Producers & Consumers Will Be Affected

To make matters worse, California has the highest poverty rate in the nation. This initiative would be hitting consumers, especially those that are at the poverty level, where it really hurts. A 2016 study by Cornell University showed that during the first 10 months after banning battery cages in California (Proposition 2), the cost of a carton of eggs increased by $1.05. A 2015 article in Capital Ag Press reported that a carton of eggs in California soared well above the $3.00 per carton mark. That may not seem like much to un-empathetic animal rights extremists, but to a struggling single mother it makes a huge difference. The 2015 Capital Ag Press article also reports that since the passing of Proposition 2, egg production in California has dropped significantly showing a loss in production of 78 million eggs from 2014 to 2015 alone.

The percentage of pork producers in California is low, providing only 2% of the nation’s total. This means the new initiative will greatly impact farmers in other states that ship their product into California. This is significant because 12% of the population in the United States resides in California. This initiative will create a massive financial stress on the pork industry that the consumer will, without a doubt, have to absorb. In an article by Feedstuffs, the National Pork Producers Council (NPPC) stated:

"If all pork producers were forced to abandon gestation stalls, it would cost the pork industry between $1.9 billion and more than $3.2 billion to transition to an alternative housing system."

Who Is Behind This Initiative?

This initiative will also impact interstate commerce. By mandating that all eggs produced and sold in California be from cage-free hens, that dictates how producers from other states market their eggs to California. States should not, and are not, allowed to enforce their laws and regulations in other states. Further, states outside of California should not be able to inspect the facilities in California. Inspections for compliance with this new regulation should be done by federal inspectors. 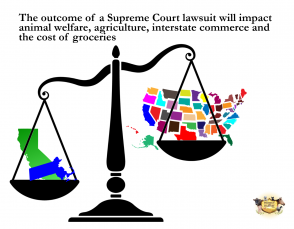 Thirteen states including Alabama, Arkansas, Indiana, Iowa, Louisiana, Missouri, and Nebraska filed lawsuits in the Supreme Court against California and Massachusetts in December of 2017. These lawsuits were filed in response to legislation passed in California in 2008, and Massachusetts in 2016 that affect inter-state commerce. The current laws make it illegal for anyone in those states to sell an egg, a piece of chicken, a piece of pork, or a piece of veal unless the animals that produced those food items were born and raised under rules set forth by the Humane Society of the United States (HSUS).

Despite the Supreme Court lawsuit, the HSUS is pressing forward with this latest initiative. They are calling it an “upgrade” of Prop 2 which passed in California in 2008. The most important thing to know is that the HSUS is against all forms of animal agriculture, whether it is a small or large farm, they make no distinctions. We thank these States Attorney Generals for entering into these lawsuits on behalf of the United States Constitution, commerce, consumers, farmers and most of all the animals in agriculture.

Click Here for Informaiton about the Supreme Court Case

Agriculture Needs to Wake Up

As a strong voice for the ag community, Protect The Harvest worked diligently to educate and inform both the agriculture community and the public of the consequences the passing of Prop 12 would bring. Purchasing television ads and billboards in large cities requires a significant financial commitment. For reference, (billboard and tv ad buy information here)

The agriculture industry needs to come together and provide financial support to combat the activities of these groups. During the campaigning for Prop 12, animal rights groups created PAC’s to raise money in support of their views. In contrast, agriculture organizations did not.

We must work together to pool donations in order to better support agriculture at a level that can surpass organizations like HSUS with their 13 million dollar investment. It can be easily accomplished with numerous, small donations made on a regular basis.

The truth is, our industry needs to come together and support one another better in order to prevent further threats by animal rights and other special interest groups against our livelihoods and our way of life. 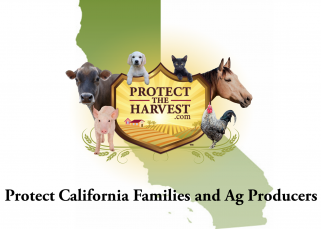 In addition to donating, there is more you can do. Spreading the word and sharing our message over social media is critical. If you live in California and are concerned about the rising costs to feed your family, or if you are a California farmer or rancher please contact your state representatives, congressmen, and governor. If you are a producer from out of state, you can still have an impact by sharing our articles and information.