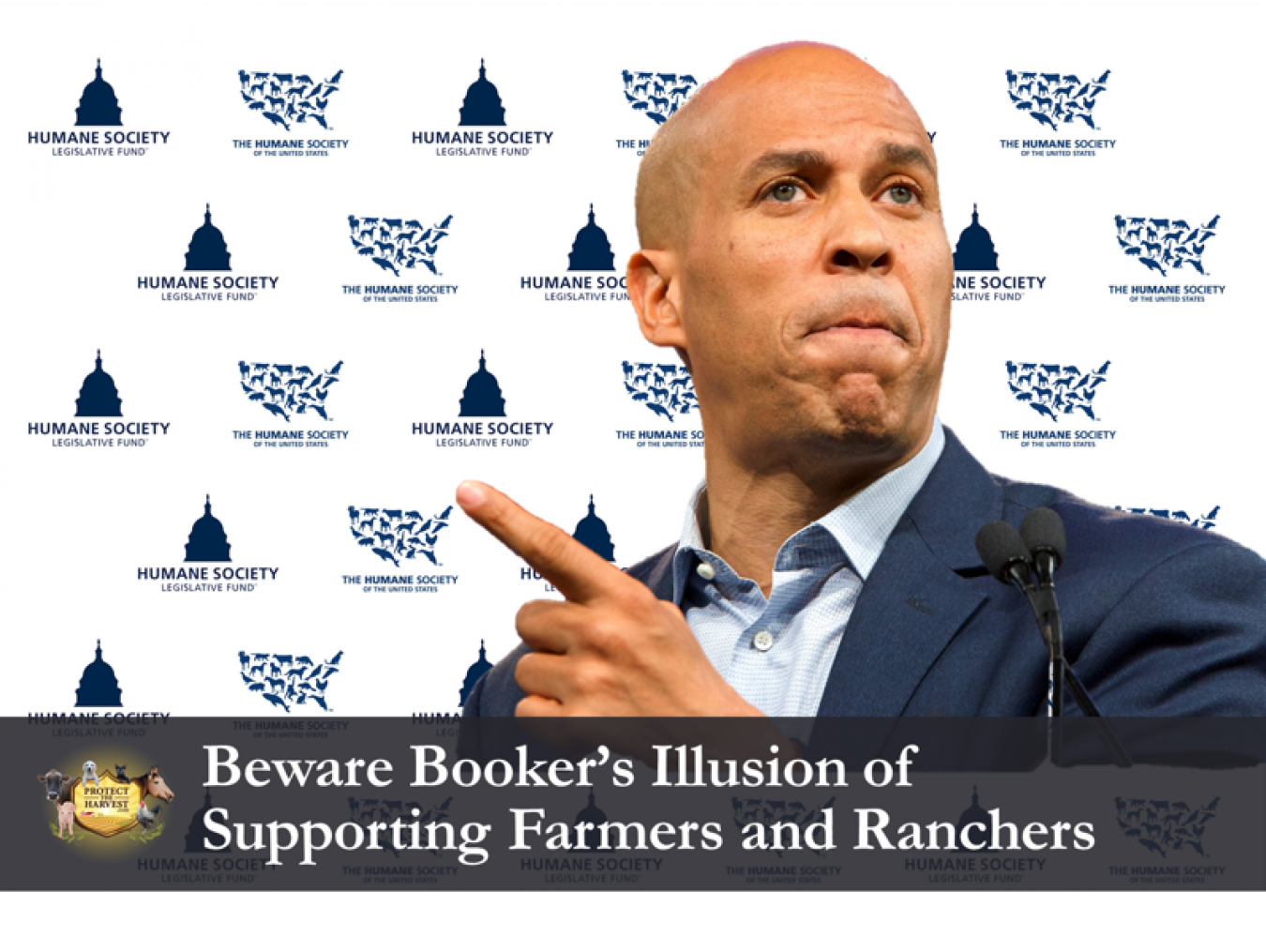 By Jacklyn Krymowski for Protect The Harvest

Senator Cory Booker, a well-loved politician of the animal extremist elites, has reintroduced his anti-modern farming legislation titled the Farm System Reform Act (FSRA). This action follows shortly after President Biden’s executive order on promoting competition in the American Economy, which Booker and his colleagues hope will provide the momentum to get this controversial and much debated act off the ground.

A companion bill was introduced to the house by another animal extremist favorite, Representative Ro Khanna. It boasted many powerful political sponsors, also with extremist affiliations, including Elizabeth Warren and Bernie Sanders.

FSRA threatens to eliminate large-scale finishing and hinder large-scale processors without regard for the family-owned farms and ranchers (who make up over 96% of the all agriculture operations) or how this would inhibit their ability to market their products.

Ironically, hot on the heels of this move, Booker appears to be extending a false olive branch to ranchers by proposing cattle market reforms in his new bill titled, “Protecting America’s Meatpacking Workers Act of 2021.” Prior to this, Booker also helped reintroduce the “Opportunities for Fairness in Farming (OFF) Act” to reform all checkoff programs. 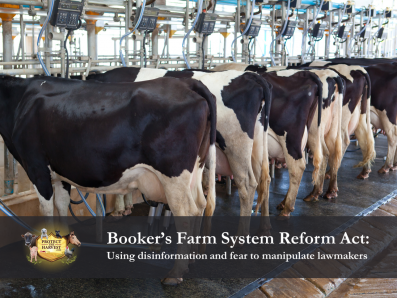 Unfortunately, some in the animal agriculture community have taken the bait, including one ranching group that vocally supports Booker in both these efforts. When taking all these details into consideration it is important to ask some questions. Why is Booker so interested in agriculture? Who are the funders backing him? Why is he now attempting to portray himself as a “friend” to farmers and ranchers after repeatedly supporting legislation designed to shut them down?

These actions by Booker should make anyone pause. Booker is a notorious wolf in sheep’s clothing when it comes to the interests of American animal agriculture and the families it employs. Booker is an HSUS darling, outspoken vegan, and animal extremist sympathizer. He has no background, education, or practical experience when it comes to farming or food production. Yet, he has tried to establish a false sense of “expertise” by centering his political career around these issues.

“…much needed protections for meatpacking workers along with systemic reforms such as creating a fair market that allows independent farmers, ranchers and robust local food systems to thrive and ensuring that consumers can actually identify where their food comes from so that food giants cannot simply shift the burden of their unfair system to others in the supply chain or import more unsustainable meat from other parts of the world.”

When speaking about OFF, Booker said in a press release:

“When checkoff programs engage in anticompetitive activity, it is a threat to a dynamic and informed free marketplace. This bipartisan legislation will help increase transparency and restore trust in checkoff program practices.”

Both these pieces of legislation have received support from multiple food and agriculture advocacy groups. At a glance, it’s easy to understand why they would be tempted to do this. Based on some of the talking points, and Booker’s own words, it seems that these are designed to protect American farmers, ranchers, and agricultural workers.

Since when has Booker been interested in preserving and upholding the values of any of these groups? As we will see, both personally and professionally he has repeatedly disavowed the current American agriculture system, especially when it comes to livestock production. His track record, and his adoring extremist fans, make that evident. If that wasn’t enough to raise concern, his reintroduction of the FSRA as recently as this past July should prove that he has not changed.

Throughout his political career, Booker has a long history of being very outspoken about his vegan ideology. He first switched to vegetarianism in 1992, after reading Gandhi’s autobiography and then became fully vegan in 2014. Speeches promoting the animal extremist ideology and promoting his vegan diet very quickly won him friends among animal extremist groups, especially the Humane Society of the United States (HSUS). In 2017, he enjoyed special treatment as a featured guest and award winner during the HSUS Farm Animal Protection gala fundraiser in Los Angeles.

"I'm the one who should be honoring this organization - they do such great bipartisan work in Washington,” said Booker according to a Yahoo! Entertainment article. “They've become one of my best partners and I feel blessed by them every day."

The Humane Legislative Fund consistently awards Booker a “100+” score for his lifetime record of supporting the animal extremist agenda. A look through his career shows he has either sponsored or otherwise upheld an array of animal extremist backed bills, nearly all of which shared support of these groups including the HSUS, People for the Ethical Treatment of Animals (PETA) and the American Society for the Prevention of Cruelty to Animals (ASPCA).

Despite Booker’s lack of practical experience or education in animal agriculture, he was able to secure a seat for himself on the Senate Agriculture Committee. He is also a mentor to fellow vegan and outspoken animal extremist supporter Senator Jabari Brisport, who was elected to New York legislature November 2020.

Booker is garnering support for his stance on OFF and the meatpacking act by groups that advocate for farm and ranch families. He is pushing the false notion that he is simply trying to allow equality and fairness for their livelihoods. Ironically, in an attempt to support FSRA the campaign #BoycottBigMeat could be found throughout the internet. This was a thin veil that tried to show such legislation could support “small farmers” and take down “the corporations.”

This mindset undermines that nearly all beef operations – large and small – are family owned and operated private businesses. It is also especially harmful to small scale producers who do rely on large scale protein buyers, finishing yards, and packers to get their products from their farm to the rest of the nation. It is these same misguided principles that carry through into Booker’s latest legislation.

The FSRA also impacts low-income households by creating a food production system that will result in expensive end products. In the long list of goals under FSRA, consumer affordability is not one of them. 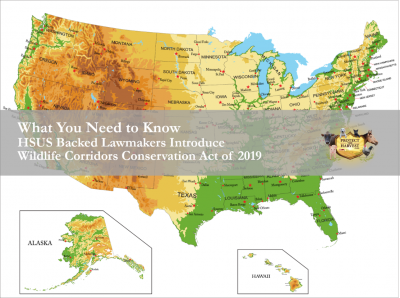 Booker is a “Rewilder” which is Fundamentally Against Farming, Ranching and Rural Communities

Booker’s record reaches beyond attempting to control animal agriculture, it also reaches into land ownership and property rights. Booker has sponsored legislation against landowners, including farmers, in favor of “rewilding” efforts within the 2019 Wildlife Corridor Conservation Act. This legislation places severe restrictions on lands that are deemed “wildlife corridors” for native plants and animals without concern for the rights of landowners to use their own property. In addition to Booker, this act was sponsored by a full line up of HSUS-backed politicians.

The lesson that Booker’s political career should teach us is to remain ever vigilant. If a sudden change in heart seems too good to be true, it probably is. We need to question the true “why” behind legislation that targets food and livestock production. This is especially true when it is presented and sponsored by a known vegan animal extremist who is against animal agriculture.

Likewise, we should always look deeper into the background of our politicians to understand their supporters, qualifications and most importantly, values.