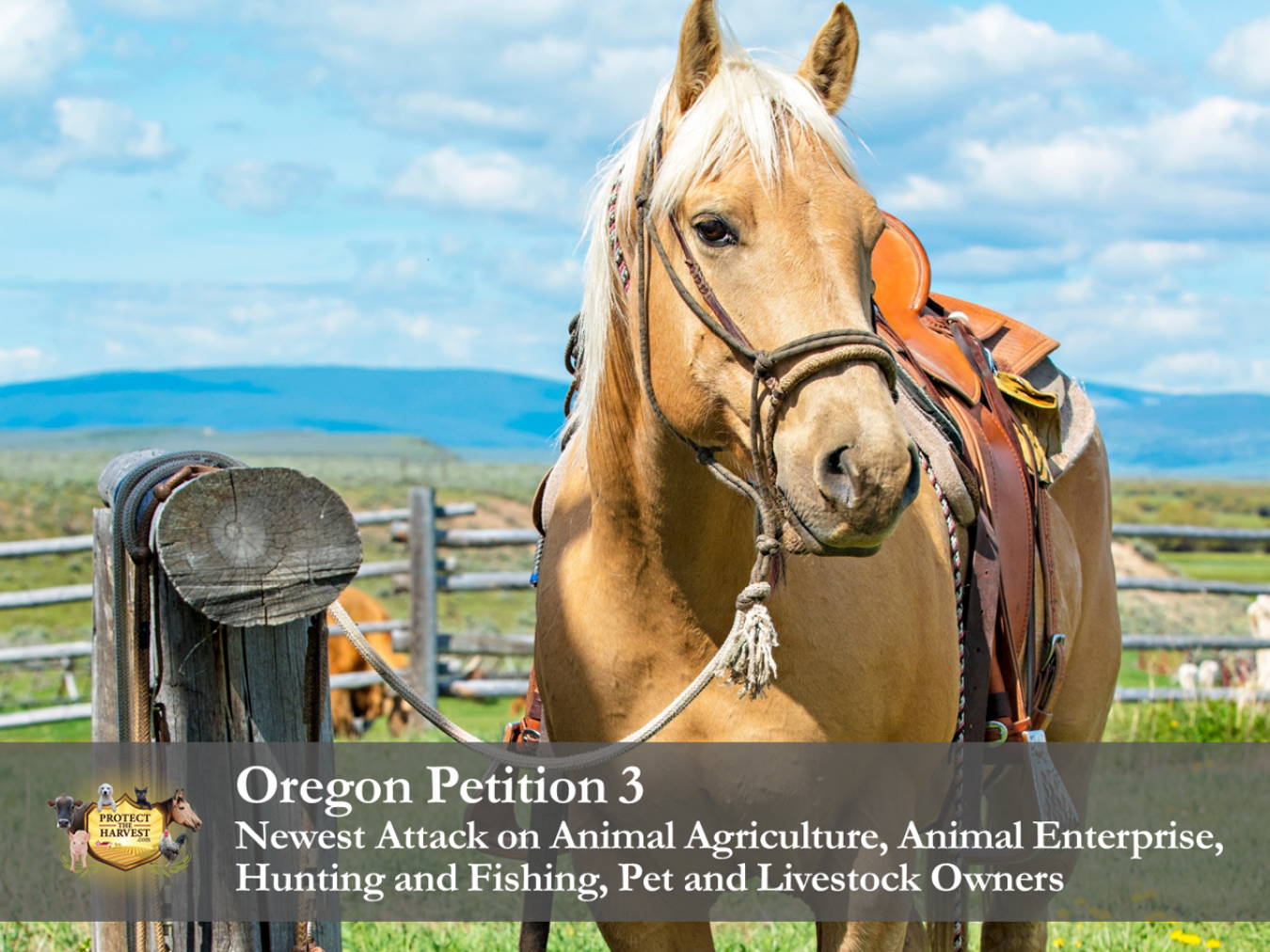 The recent abandonment of the radical animal extremist ballot initiative IP 13 in Oregon is a relief to many. However, as of March 16th, 2022, Oregon animal extremists are now working to re-introduce IP 13 under a different name. This initiative with a new name and signature collecting period is now known as Petition 3 (P 3) or the “Abuse, Neglect, and Assault Exemption Modification and Improvement Act.” They are hoping to collect enough signatures so it will be on the voting ballot in 2024. It is imperative for the livelihood of Oregon farmers and ranchers that it does not become law.

The goal of IP 13 and now P3 is to make it illegal to utilize animals for food, fiber, or simply companionship. This is accomplished by creating stipulations where activities such as artificial insemination, standard training methods, and common and humane animal husbandry practices are illegal. These activities could then land farmers and pet owners with a criminal record and prison time. Both versions are harmful to Oregon families and animals. If passed it will only serve the ideological agenda of animal extremists who are vying to end animal agriculture and animal ownership.

Protect The Harvest has penned and shared numerous articles regarding the threats IP 13 posed to livestock production, hunting, fishing, animal ownership, and veterinary medicine. We have been working to spread awareness of this egregious ballot initiative since it was initially proposed by a group led by David Michelson who is a known animal rights extremist. IP 13 proposed anti animal agriculture laws that would have subjected all animal owners and veterinarians which would put them in danger of amassing a criminal record.

A particular section of IP 13 that was of much concern was the redefinition of “sexual assault” on animals. Changes to Section 6 ORS 167.333, which is an already existing animal cruelty law in Oregon, would make it impossible for farmers, ranchers, and veterinarians to assist in NORMAL reproductive practices.

Much Like its predecessor, IP 13, Petition 3 (P 3) uses words and statements intended to misrepresent animal agriculture, pet ownership, and livestock ownership in Oregon. The “people of Oregon” who filed this petition want its citizens to believe a “yes” vote means they are doing good for animals.

What they don’t want you to know is their real goal. This goal is to charge farmers, ranchers, pet owners, and even veterinarians with a felony or misdemeanor for using common animal husbandry practices.

Ultimately, they plan to take down animal agriculture and pet ownership. This becomes apparent in the amendment (see below) to Section 7 ORS 167.332. They want to take away animals they deem “abused” or “assaulted.” Their definition of “abused” includes an animal being tied up, undergoing certain veterinary procedures, and by being “assaulted” during standard breeding. Some of these practices include tying your dog or horse up and not providing “proper” shelter. This ignores the fact that livestock live outside.

The AKC in their legislative alert states, “Now known as Initiative Petition 3, it is once again titled the “Abuse, Neglect, and Assault Exemption Modification and Improvement Act”, and would clearly criminalize hunting, artificial insemination, and many standard animal husbandry practices – including “reasonable handling and training techniques”.

“[(b)](2) In addition to any other penalty imposed by law, a person convicted of violating ORS 167.322 (Aggravated animal abuse in the first degree), 167.333 (Sexual assault of an animal), 167.365 (Dogfighting) or 167.428 (Cockfighting) or of a felony under ORS 167.320 (Animal abuse in the first degree), 167.325 (Animal neglect in the second degree) or 167.330 (Animal neglect in the first degree) may not possess any animal [of the same genus against which the crime was committed or any domestic animal] for a period of 15 years following entry of the conviction. However, the sentencing court may reduce the prohibition period if the person successfully completes mental health treatment approved by the court.”

The animal extremists pushing P 3 are working to criminalize animal agriculture and pet ownership, and they are upping the ante to include criminal child abuse. This is accomplished in the language by stating it would be a “crime” and therefore “child abuse” if a child is exposed to standard animal husbandry practices. See their proposed amendments for Section 5 ORS 167.325 (existing Oregon animal welfare law):

“(c) The person knowingly commits the offense in the immediate presence of a minor child and the person has one or more previous convictions for an offense involving domestic violence as defined in ORS 135.230 (Definitions for ORS 135.230 to 135.290). For purposes of this paragraph, a minor child is in the immediate presence of animal neglect if the neglect is seen or directly perceived in any other manner by the minor child.”

As any animal owner knows, pets and livestock may need to be tied up for one reason or another. Animal owners also know that sometimes animals can get injured while tied up and these extremists want to claim child abuse if a minor witnesses it. For instance, it is a fairly common occurrence among horses to set back (pull against their lead rope) when they are young and learning how to be tied up. In some cases, this can lead to them falling over from the force and injuring themselves. This is no different than a child being told not to touch a hot stove and them doing it anyways and getting burned. While this is always a concern of horse owners it is sometimes unavoidable. The same can be said for the children of horse owners. They know that it is just a part of horse training and are definitely not “abused” by watching it happen. The only repercussions to the child would be positive ones. They will learn how to safely tie horses up and gain experience with horses in difficult situations. If a horse does not learn to stand tied the consequences can be great. They would not be able to receive veterinary care, basic animal husbandry, trimming, or even training. When a horse is unable to be tied, there is greater risk of injury and less likelihood that they can receive basic, necessary care or help in an emergency as it would be difficult to move them from one location to another. The benefit of a horse learning to stand tied far outweighs the risks.

Supporters of P 3 must obtain 1000 signatures in order to send it to the Oregon State Attorney General. Once the signatures are obtained it will be given an official title. From there they will seek more signatures, approximately 100,000 for the 2024 ballot. Once on the Oregon ballot, it will either be voted into law or defeated by the citizens of the state of Oregon.

What Happens if P 3 Becomes Law

The passing of P 3 will set a dangerous precedent for other states to follow. Unfortunately, this attempt to criminalize animal ownership and animal agriculture is not the first. Colorado’s Initiative 16 proposed similar ideas under the guise of “animal welfare.” Thankfully it was thrown out on a technicality. It is crucial we keep legislation like this from passing to not give headway to more extremist initiatives. One example, Biden’s 30x30 “America the Beautiful” executive order, should cause great concern. It aims to take privately owned land from farmers and ranchers under the guise of “preserving” the land. Every step forward extremists take is a step backwards for the agriculture industry and animal owners.

What We Can Do – Provide Support

Extremist groups are pushing their ideology and agenda across the country. We can no longer sit back and hope that someone else will take care of it. We all need to get involved, share information, take action when needed and support initiatives that protect our way of life. The Calvary Group has introduced an important bill in several states titled, “The Working Animal Protection Act” (WAPA) and in Utah, the Working Animal and Animal Enterprise Protection Act. WAPA’s main goal is to protect lawful businesses from egregious legislation and ordinances. In 2021, the Working Animal Protection Act was signed into law by the states of Arkansas and Oklahoma. Furthermore, some states have passed right to farm and right to food bills which protect farming and ranching practices.

At Protect The Harvest, our mission is to inform, protect, and respond. Spreading awareness through information is our focus.

Complacency has been a friend to animal and environmental extremist groups. It is extremely important that as United States citizens we all stay abreast of the activities of these groups and take action when needed. More often than not, underneath their veil of big words and gas-lighting, is a plan that harms our rights.

We have information on our website under the “Get Involved” heading titled, “Protecting our Lifestyle and Livelihood” which provides steps to take to take action.

Information About The Cavalry GroupHERE