WHO IS REALLY BEHIND THE CONGRESSIONAL ANIMAL PROTECTION CAUCUS? 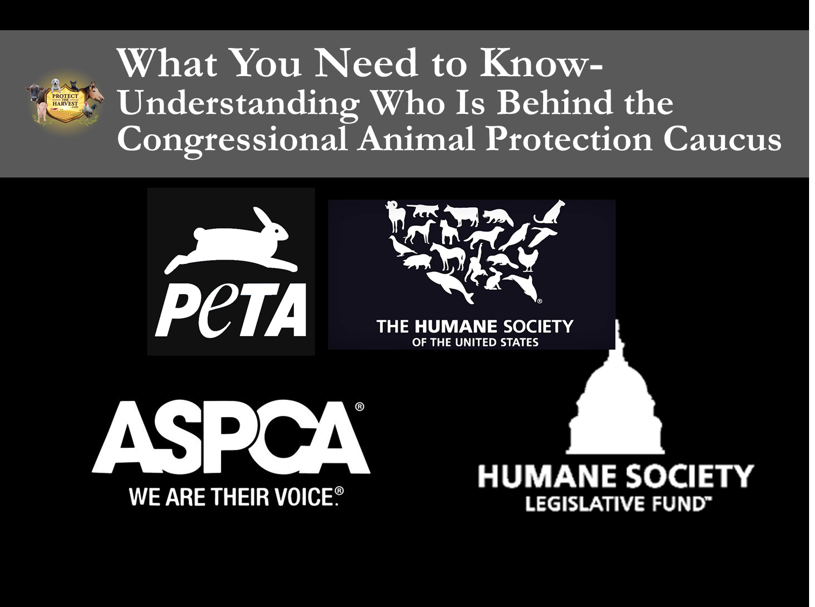 Extremist groups with political power, especially those which present themselves as groups supporting “animal protection” and “animal welfare” are especially dangerous. This is because their idea of protecting animals and animal welfare do not fall under mainstream ideals, nor do they fall under the definition of animal welfare as outlined by the American Veterinary Medical Association. As with many animal extremist groups that mislabel themselves in order to deceive the public, they are masters at using common terms to cloak their true agenda.

CAPC Has Over 160 Members

The Congressional Animal Protection Caucus (CAPC) is a growing group of lawmakers who are being influenced by animal extremist ideology. Voters should be wary of the legislation the caucus pushes and the politicians involved in the group. The caucus was founded in early 2009 and established by Representatives Tom Lantos (D-CA) and Chris Shays (R-CT). The current chairs of the group are Reps. Earl Blumenauer (D-OR) and Vern Buchanan (R-FL) and boasts 160 members. While the group does have both a Republican and Democratic chair, if you look through the member list, you’ll notice that the overwhelming majority are democrats and only 15 are republicans.

On the surface CAPC seems like a group with good intentions. However, they have participated in multiple pro-animal extremist political movements and are backed by the usual players affiliated with radical animal extremist groups like the HSUS, ASPCA, PETA, and many other groups.

CAPC states their purpose as follows:

“The purpose of CAPC is to highlight important issues affecting animals and to educate Members and their staff on the need for sensible animal protection legislation. Partnering with reputable animal welfare organizations, CAPC sponsors non-partisan briefings and tracks the progress of relevant legislation, providing Caucus members with dependable information on animal welfare issues. The goal of CAPC is to build broad coalitions in support of common-sense, humane animal welfare laws.”

From the beginning, HSUS and their political arm Humane Society Legislative Fund (HSLF), have been heavily involved with the Animal Protection Caucus and its leadership.

In a statement, Mimi Brody, HSLF’s director of federal affairs said of CAPC:

“We co-host congressional briefings on key bills with the Animal Welfare Institute and ASPCA in cooperation with the Caucus. Most recently, we held a virtual briefing in June 2020 on the PREPARED Act (H.R. 1042), which requires facilities regulated by the Animal Welfare Act – including puppy mills and roadside zoos – to have contingency plans for the animals in their care during emergency situations such as natural disasters, pandemics, power outages, and animal escapes. The Caucus helps flag and mobilize congressional support for important legislation and sign-on letters on a wide range of priority matters.”

Note how the CAPC purpose statement says nothing about animal extremism or who they consider to be “reputable animal welfare organizations.” This is a euphemism for extremist groups like ASPCA and HSUS who both supported CAPC legislation and efforts. Within their virtual “advocacy center” ASPCA even has a form for people to fill out that sends an email that will encourage their congressmen to join CAPC.

Many may not realize that Representative Matt Gaetz of Florida is a member of CAPC who has voted on the side of animal extremist ideology. Gaetz was a high-profile supporter for Florida’s Amendment 13 which ended the state’s greyhound racing industry in 2018. He described the sport as “a barbaric practice that has no place in our society.”

This legislation was a major blow to the greyhound racing industry as Florida was home to 11 of the country’s 16 greyhound tracks. It effectively ended the jobs of thousands of dogs, trainers and breeders in the state. Unfortunately this legislation was made possible thanks to extremist groups like HSUS and Grey2K that misinformed the public about the sport and industry.

The two current CAPC chairs are heavily influenced by ASPCA and HSUS. The appointment of Representative Blumenauer was openly applauded in a press release from the Animal Welfare Institute, HSUS, ASPCA, and the Humane Legislative Fund (HSLF). On his website, Bluemenauer proudly displays his 100% positive rating from the HSUS for his legislative efforts.

Representative Buchanan is another darling of the animal extremist community. In 2020 he was given the HSUS “Legislator of the Year” award for his support of their causes. This made him the only member of the House to win this award twice from the organization after having first received it in 2019. Like Blumenauer, he also sports a 100% rating from the organization.

Working together, Buchanan and Blumenauer voiced their support for multiple extremist-endorsed legislation including:

Like so many other pieces of animal extremist-influenced legislation, the PACT Act was written to be incredibly vague. It was intended to “revise and expand” what constitutes criminal animal crushing. It reads:
“(1) the term ‘animal crushing’ means actual conduct in which one or more living non-human mammals, birds, reptiles, or amphibians is purposely crushed, burned, drowned, suffocated, impaled, or otherwise subjected to serious bodily injury (as defined in section 1365 and including conduct that, if committed against a person and in the special maritime and territorial jurisdiction of the United States, would violate section 2241 or 2242)”

The issue is that the vagueness would encompass multiple routine procedures in safe animal handling and management practices. It is so vague that it had to include an exemption for veterinarians and livestock, but due to the nature and extremist origins of the bill, it still left legitimate concerns for anyone doing any husbandry practices regardless of the animal classification. It should also be noted that given the shortage of large animal veterinarians in rural America, many owners are forced to learn and conduct lifesaving emergency procedures, which could be included in the language of the PACT act. For example, a rancher needing to use a trocar to release gas from the rumen of a bloated cow.

The SAFE Act is especially threatening to equine welfare as it would prohibit humane horse processing in the U.S. and prevent shipping horses for abroad processing. Unfortunately, this type of legislation also contributes to the already overburdened horse “rescue” system in that is insufficiently funded and understaffed to handle the burden of unwanted horses in the U.S.

The Prevent All Soring Tactics (PAST) Act

The PAST Act was introduced with direct involvement by the HSUS and seeks to further restrict the Tennessee Walking Horse industry. The intent was to ban all devices commonly used, including pads, weighted shoes, and actions devices despite that there is no evidence that proves they are inherently harmful to horses. This act also tries to regulate an industry that already has much more clear and beneficial rules and guidelines in place.
Truth in Fur Labeling Act
This act, signed into law by President Obama, requires the labeling of all fur products regardless of value. Previously items were exempt if they contained less than $150 worth of fur. This was promoted and supported by PETA.

Beware of Extremists in Politics

Be wary of politicians and political organizations who claim to be in pursuit of animals’ best interests and protection. Unfortunately, extremist groups are experts at using reasonable sounding language and misleading titles to sway people to entrust them with their votes and lawmaking. In reality, these groups are not interested in what is actually best for animals based on science and data. Instead, they are in the business of promoting their agendas which often include trampling over industries and individuals who stand in their way.

It is always important to be familiar with your lawmakers and representatives. It is important to research the groups they affiliate with and the groups that are working to influence them. Unfortunately, in America today, there are more lawmakers who seem to only be concerned with pushing their own ideology and agenda instead of looking out for the people they are supposed to be representing. We are also seeing this on the municipal level. An example is the Los Angeles City Council with their banning of horse racing, circuses, and new ordinance language banning rodeo and animal exhibitions. They have also given an audience to radical extremists protesting pony rides for children. It should be very alarming that there are 160 Congressional Animal Protection Caucus members and it continues to grow.

Are your representatives on the member roster?

Read more about CAPC’s past legislative support HERE and HERE

Learn more about PAST HERE