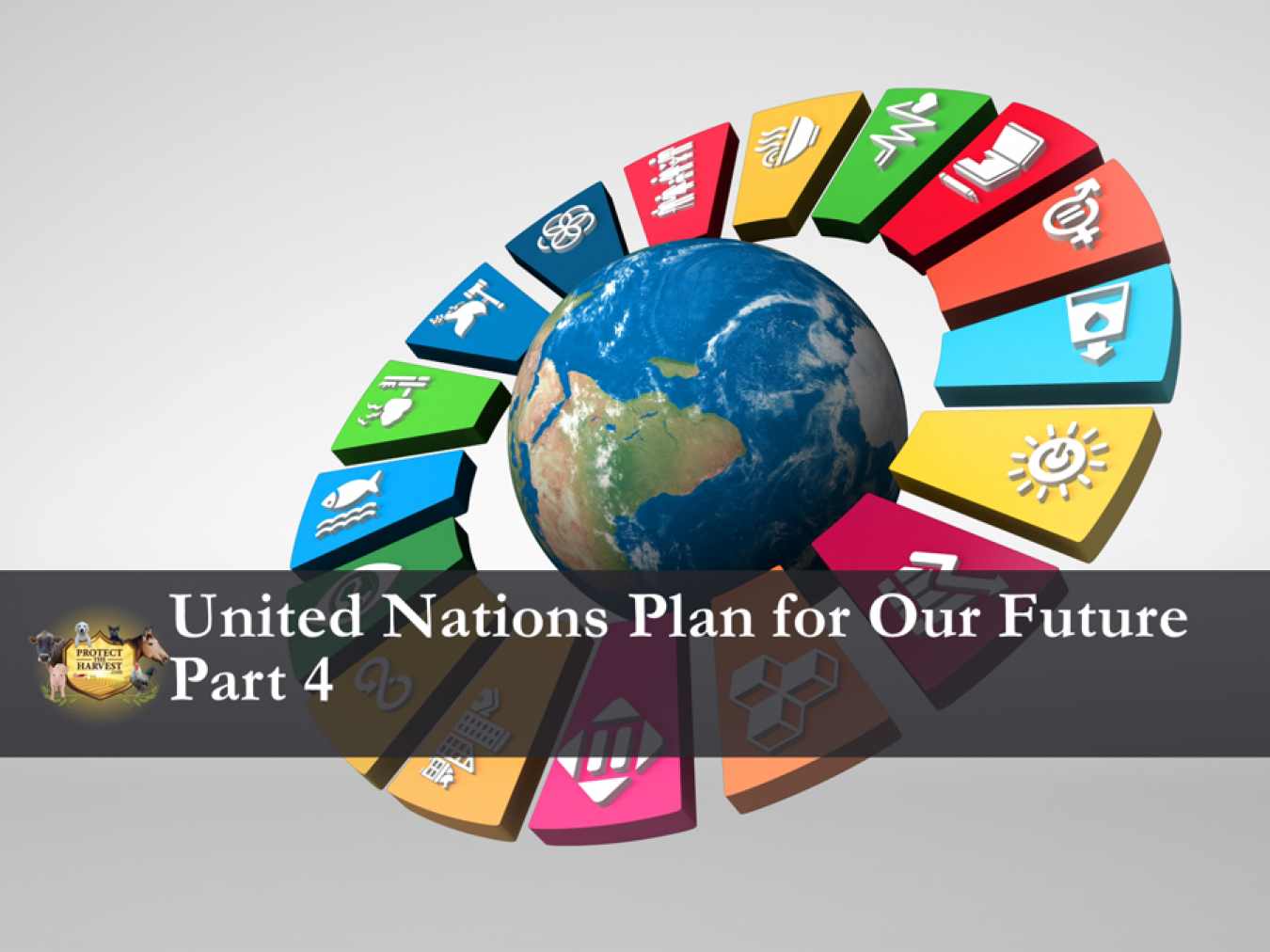 Continuing the discussion of the United Nations, its true agenda and what lies below the surface, let us look at Sustainable Development Goals (SDGs) 11 thru 15. In our previous UN article (part 3) we discussed many of the goals that primarily impact agriculture. This edition will focus on the goals that are especially geared towards the climate, sustainability, and how essential human activities (like production, housing and living) are to be monitored, regulated, and scrutinized.

In a recap from a meeting in 2020, Jason Hickel, an established environmental anthropologist, discussed the SDG index and how some countries are ranked. He stated that the problem with that index is that it has very little to do with sustainable development and in fact, the nations highest on the index are some of the most environmentally unsustainable.

The evaluation and assessment of managing the goals are misleading. A long list of tightly intertwined goals in one focus, such as sustainability, will create significant trade-offs. These trade-offs illustrate the absurdity of all the SDGs ever being fully accomplished as they are written. The tradeoffs also show a willingness to sacrifice the well-being of people in the name of globalism.

Upon the first reading of Goal 11, we see language used to establish a sense of living harmoniously. While we all want housing to be safe, long-lasting, and sustainable, there are some serious flaws in this ideal – especially as the population grows.

Upon examining the targets and indicators for this goal, we see little clarification to the definitions and the means to accomplish them. For example, Target 11.3 reads:
“By 2030, enhance inclusive and sustainable urbanization and capacity for participatory, integrated and sustainable human settlement planning and management in all countries.”
The first indicator listed under this goal is concerning as they want to measure progress according to the “ratio of land consumption rate to population growth rate.” What exactly is that supposed to mean?

Land consumption is itself an arbitrary term. Less land is currently used to produce more calories and nutrients thanks to modern farms and food production methods. Does this not influence the “ratio of land consumption” in some way? Likewise, who determines what an “acceptable” ratio of land usage might be for a growing population. If the ratio was found to be insufficient, would that mean those in power would have the authority to redistribute and reorganize as they deem necessary?

Links Between Urban and Rural Areas

Another concerning target with this goal is to “support positive economic, social and environmental links between urban, per-urban and rural areas by strengthening national and regional development planning.” This “development planning” seems to be code for further developmental efforts and legislation, like the SDGs by the UN.

The indicator to this target suggests that the UN plans to extend its reach by working with an increasing number of local and national governments as listed: “Number of countries that have national urban policies or regional development plans that (a) respond to population dynamics; (b) ensure balanced territorial development; and (c) increase local fiscal space.”

It seems clear that the promises of this utopia rely on compliance and greater restrictions as the UN and its other globalist supporters see fit. Having greater control on the organization and growth of human society must go hand in hand with this outline, and that appears to be by design.

What does Goal 12 mean by using the words, “sustainable consumption and production patterns” and who decides what does and does not fit into that category?

Target 12.7 is quite plain: “Promote sustainable public procurement practices…in accordance with national policies and priorities.” This is upheld by the previous Target 12.6 which reads “Encourage companies, especially large and transnational companies, to adopt sustainable practices and to integrate sustainability information into their reporting cycle.”

There are already food and nutrition policies in place for some cities and states right here in the U.S. Consider how New York sought to regulate the sales of “sugary drinks” in the name of public health as one example. From school lunches to nutritional assistance programs to animal extremist influenced livestock production regulations, there is greater motivation for governmental entities to restrict choice in both food production and consumption.

On a more personal scale, we see this play out in grocery stores where there are labels upon labels indicating how a product was grown or if it meets specific standards for certain certifications. This type of marketing is how the organic marketing scheme took off. While organic certainly has its benefits for consumers that choose them, their production methods are not necessarily the most sustainable or efficient. In fact, they often require more resources than conventionally raised food

Goal 13 can be tied to Goal 15 regarding its push to preserve the natural environment and climate. While this goal promises to make the planet a greener and healthier place, it comes with a hefty price tag.

Let’s start by examining the goal’s target 13.2 which is to “Integrate climate change measures into national policies, strategies and planning.”

Its indicators include the following:

“Number of countries with nationally determined contributions, long-term strategies, national adaptation plans and adaptation communications, as reported to the secretariat of the United Nations Framework Convention on Climate Change.”

Note how this mirrors the language in SDG 11 about incorporating more countries and regions to implement the necessary changes and measures as determined by the UN. The push is clear on getting more nations to comply with “climate action” regulations and legislative efforts.

This continues into the goal’s next target:

“Implement the commitment undertaken by developed-country parties to the United Nations Framework Convention on Climate Change to a goal of mobilizing jointly $100 billion annually by 2020 from all sources to address the needs of developing countries in the context of meaningful mitigation actions and transparency on implementation and fully operationalize the Green Climate Fund through its capitalization as soon as possible.”

U.N is the Primary Forum for Negotiating Global Response

It should be noted that there is an asterisk in the next target which acknowledges “the United Nations Framework Convention on Climate Change is the primary international, intergovernmental forum for negotiating the global response to climate change.”

Something else to be considered in this goal is there is no mention of preserving our resources through the systems already in place. These systems such as good farming practices like grazing, cover crops, and crop rotations should be the backbone of these goals.

Goal 14: Life Below Water – Conserve and sustainably use the oceans, seas and marine resources for sustainable development

Goal 14 is another example of trade-offs between goals and reality. All of the targets seem simple as to “reduce marine pollution” and to “protect and restore ecosystems.” It also calls for the conservation of marine and coastal regions, but how that is approached can be problematic.

The Aral Sea, formerly the fourth largest inland lake in the world, has rivers that fed into the lake, but since have been diverted to irrigate desert farmland which helped to achieve Goal 2 (enhance food security). It’s important to maintain water for drinking and for food production. However, since the 1960s the lake has shrunk by over 90%, thus sacrificing the Goal 14 which is to conserve and sustainably use the water resources and the aquatic life they encompass. This is just one example of how one goal can affect other goals. Who gets to decide which goal is most beneficial and which should be implemented first? If a goal is impacting another goal, which goal trumps the other? These are all questions that seem to be ignored when looking at the big picture.

Preserving our natural resources is a common goal for everyone. A problematic issue with this is in determining the best way to “sustainably manage” these resources.

Many politically and governmentally influenced paths to “sustainability” have repeatedly proven to be inefficient. A great example of this would be funding alternative energy projects like wind turbines or solar panels. Both of these methods sound greener and better by virtue of not requiring fossil fuels (at least not directly) but they also require more energy and resources to build than they can replace in their productive lives. Not to mention, wind and solar are both not reliable or sustainable power sources without the use of large battery banks that also have lifespans and rely on other resources. They can also have a negative impact on wildlife.

Goal 15 and its targets to “protection,” “conservation,” and “restoration” of terrestrial and freshwater ecosystems have eerily similar language to the rewilding efforts we have seen come up on the federal and local levels. Some recent examples are the Ventura County Wildlife Corridor, legislation which would restrict landowners from their own property to preserve natural habitats, and President Biden’s “America the Beautiful” executive order which aims to conserve 30% of all U.S. land and waterways– public and private – by 2030.

Core beliefs of the rewilding movement include:
• Humans are not part of the ecosystem and have no part in nature
• The millions of acres of protected lands already around the globe are insufficient
• Existing protections for apex predators are insufficient
• Even while there are plentiful populations of apex predators like wolves and grizzly bears in other parts of the world, they need to be restored to areas where they roamed over a century ago
• Much of our rural lands should be returned to nature to allow “unrestricted movement among wide ranging animals”

When efforts to conserve or rewild natural habitats are made without involvement from landowners and those who live in the areas, there is good reason to be concerned. Often these decisions are made by politicians and organizations who are far removed from the locals who make a living in these habitats shared with wildlife. This not only impacts the private right of landowners and citizens, but it also disrupts important industries such as agriculture.

Upon close inspection, we can see that the UN’s SDGs are neither truly about sustainability or development. Instead, there is colorful language with vague promises that propose a very unsustainable and inequitable way to get there. It is worth asking the question, who is benefitting the most from these propositions? Is it to create a new world for everyone or to place some strategic restrictions to build a better world for the select few?

Read more about why the SDGs are unsustainable HERE

Prev Article
United Nations - Plan for Our Future Part 3
Next Article
No next article exists.