HOW NON-GOVERNMENTAL ORGANIZATIONS ARE IMPACTING WILDLIFE AND LAND USE 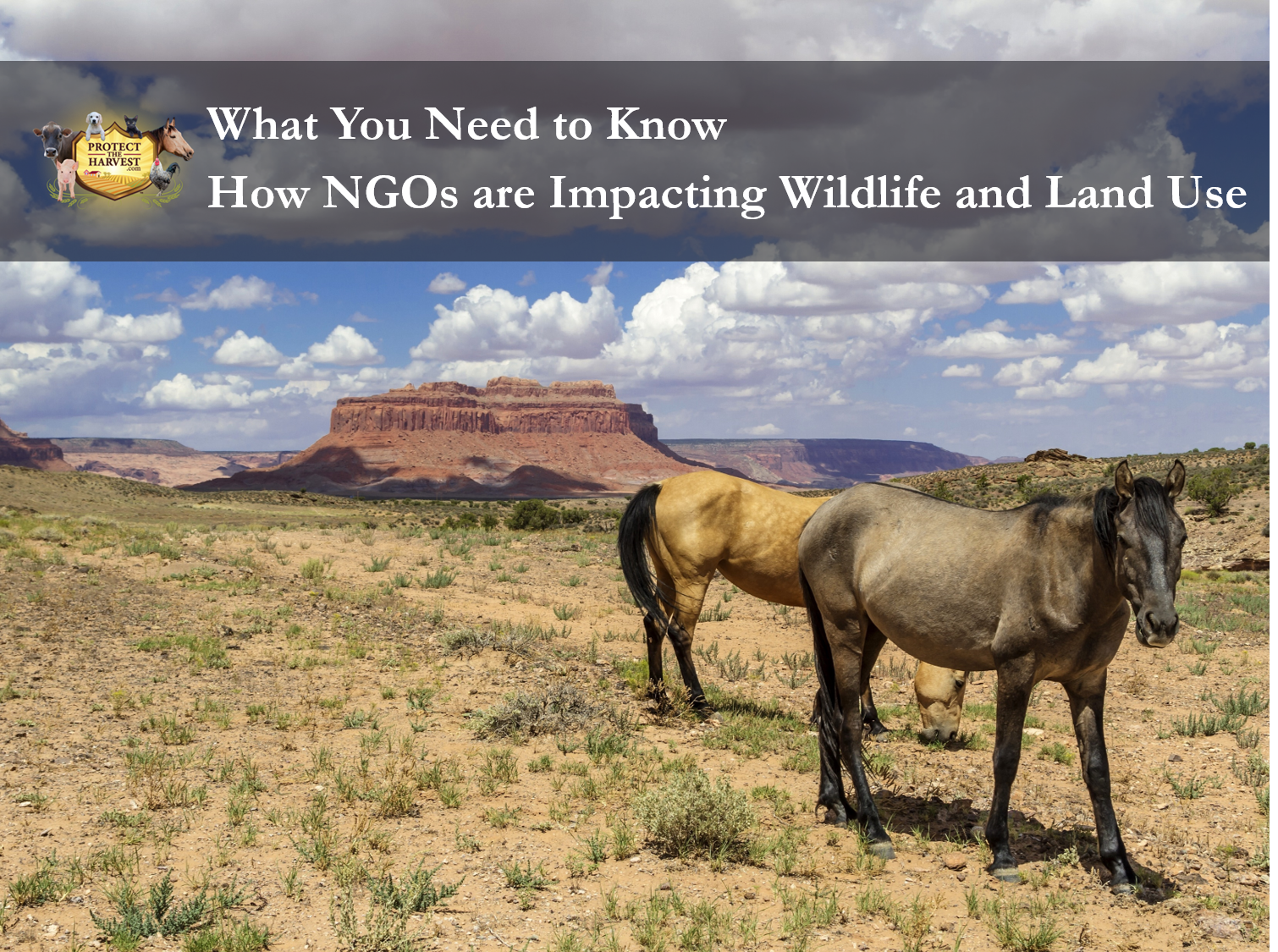 Hunting and fishing are not only a beloved pastime to 11.5 million Americans, but these activities also aid in wildlife conservation and wildland preservation.

According to the U.S. Department of Fish and Wildlife, the Duck Stamp, which is required as a license for waterfowl hunting helps protect and restore habitat for migratory waterfowl and other birds and wildlife. Ninety-eight cents of every dollar spent of Duck Stamps go directly to purchase waterfowl habitat or acquire conservation easements within the National Wildlife Refuge System. Since 1934, almost 6 million acres of habitat have been conserved with the help of Duck Stamp funds.

Additionally, state wildlife agencies and the country's wildlife conservation system are heavily dependent on sportsmen for funding. The Federal Aid in Wildlife Restoration Act, also known as the Pittman-Robertson Act, was passed in 1937. License fees and excise taxes on guns, ammunition and angling equipment generate money that provides about 60 percent of the funding for state wildlife agencies, which manage most of the wildlife in the U.S. It funds a range of conservation programs like habitat restoration and hunter safety courses. Since it began in 1937, it has raised over $14 billion. 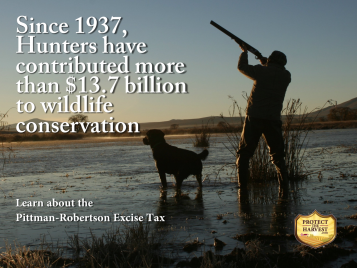 Click here for more information regarding the Pittman-Robertson Act

As urbanization changes our land, population management of several species of animals like deer and antelope aide in maintaining a balance within the ecosystem.
For these reasons, we support responsible and ethical hunting and fishing in the U.S.

It’s no surprise that animal extremists don’t like hunting or fishing. However, you may be surprised to know that the Humane Society of The United States (HSUS) is one of the nation’s most outspoken anti-hunting organizations. Wayne Pacelle, former CEO of HSUS, previously stated: “If we could shut down all sport hunting in a moment, we would.”
The HSUS continually trumpets their so-called ‘successes’ in restricting the rights and freedoms of American hunters and anglers. An entire retelling of HSUS’s anti-hunting and anti-fishing policies would be too long to list, but here are just a few current examples of HSUS’s activities: 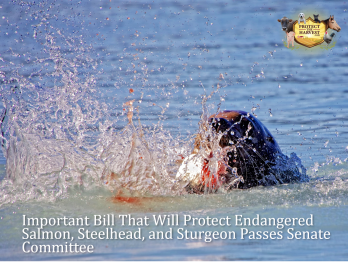 Over the past decade, biologists from the Department of Fish and Wildlife in Oregon and Washington have been studying the effect of the sea lion’s predation on the salmon population. Their studies have shown that salmon, steelhead and sturgeon populations are declining due to sea lion predation. Columbia River salmon are not only on the Endangered Species List but a keystone species within this region. This means that their numbers are already in dire need of assistance but also that the loss of the species would be detrimental to the entire ecosystem.

As a result of this, the Department of Fish and Wildlife has tried several different options to deter the sea lions from loitering at the Bonneville Dam, where the fish are most vulnerable. They have tried relocating the sea lions by using hazing techniques, like disruptive sounds, but all to no avail. Therefore, in an effort to help preserve the fish population, they have recommended culling a small number of sea lions as a final option. 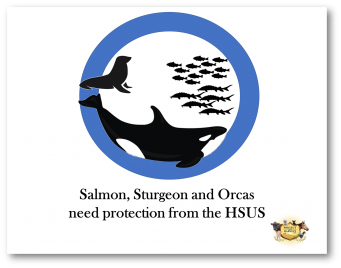 In response, the Humane Society of the United States has sued the U.S. Department of Fish and Wildlife. This is in pursuit of their animal extremist agenda which completely disregards the far-reaching consequences of the salmon’s population decline. The salmon, steelhead, and sturgeon are important food sources for other species like the killer whale which is also endangered. The HSUS’ decision to block the Dept. of Fish and Wildlife’s plan to save these fish ultimately prioritizes their wellbeing over the entire ecosystem and the other endangered species within it. This is just another example of them pushing their agenda over helping actual animals in need.

Article - Salmon, Sturgeon and Orcas Need Protection from the HSUS

Article - Salmon, Sturgeon and Orcas Need Our Help Now More Than Ever

The Wild Horse and Burro Act of 1971 requires management plans to, "maintain a thriving natural ecological balance among wild horse populations, wildlife, livestock, and vegetation and to protect the range from the deterioration associated with overpopulation." The Act states that the land is required to be maintained for multiple use and contains provisions for the management and removal of horses as necessary:

“The Secretary shall maintain a current inventory of wild free-roaming horses and burros on given areas of the public lands. The purpose of such inventory shall be to: make determinations as to whether and where an overpopulation exists and whether action should be taken to remove excess animals; determine appropriate management levels of wild free-roaming horses and burros on these areas of the public lands; and determine whether appropriate management levels should be achieved by the removal or destruction of excess animals, or other options (such as sterilization, or natural controls on population levels).” 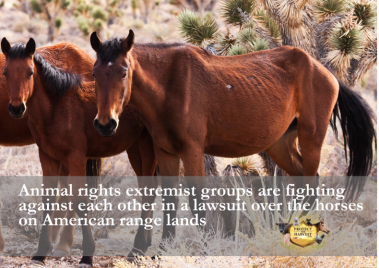 While the Wild Horse and Burro Act of 1971 clearly gives the Secretary of the Interior the authority to make decisions and take management actions to protect horses on the rangelands, wildlife, the ecosystem, and to maintain multiple use, over the years, animal extremist and other non-governmental organizations (NGO’s) have thwarted management efforts at every turn. This is done via repeated protests and lawsuits to block gathers, removals, population control methods, and research studies. These NGO’s have also grossly misled the public who are generally unaware of the condition of the rangelands. These groups have also launched massive marketing and advertising misinformation campaigns in order to generate public support and to garner donations for their different organizations. The result is a staggering animal welfare crisis for both rangeland horses and wildlife, an endangered, damaged rangelands ecosystem and loss of use for both the general public and ranchers who own grazing allotments and water rights.

Links to Information about Lawsuits Filed by NGO’s. Please note this is just a small sampling of the roadblocks presented by Non-Governmental Organizations:

American Wild Horse Campaign (AWHC) was originally founded by animal extremist activists Neda Demayo and Virginie Parant. The organization states on their website, “Our efforts include working collaboratively with other advocacy groups, meeting with members of Congress on Capitol Hill and their district offices and mobilizing and empowering our supporters to reach out to their elected officials on behalf of wild horses and burros.” Essentially, they work to block the Bureau of Land Management from doing anything to manage the wild horse and burro populations.

The AWHC fails to recognize this issue and has since aligned itself with animal extremist organizations like the Humane Society of the United States and the ASPCA. Following in their typical M.O. the AWHC has pleaded for donations, asking to “Save the Mustangs!” all the while most of their funds go to litigation instead of finding a way to actually help mitigate the issue. As usual, another organization has prioritized pushing an agenda over helping the actual animals in need.

The Impact of Overgrazing

Overgrazing impacts much more than the health and welfare of horses on the rangelands. It has a significant impact on the entire rangelands ecosystem. In addition to wiping out native grasslands, water sources become severely depleted or completely destroyed. A damaged ecosystem cannot support wildlife, rangeland horses or other livestock. In short, animals in these damaged areas die from starvation and dehydration.

When the rangelands become depleted, ranchers who hold grazing and water rights are restricted from grazing livestock on their allotments. America’s public lands are multi-use. They are intended for wildlife, habitat conservation, recreation, natural & cultural preservation, health & safety, resources, and commercial use. Food is one of these resources and that is why the government encouraged settlement of our rangelands and awarded farmers and ranchers water and grazing rights.

For more information about land use, grazing and water rights visit the Range Rights and Resource Symposium website: http://rangerights.com/about/

The current estimated on-range wild horse and burro population (as of March 1, 2020) is 95,114 animals. This is more than three times the appropriate management level (AML) recommended by wildlife biologists for a healthy ecosystem (AML is 27,000 total for all Herd Management Areas – HMA’s).

There are an additional 50,000 horses in government holding facilities costing taxpayers over $50,000,000 per year to feed. With the horse herds doubling in size every 4-5 years and the rangelands already damaged and over-burdened, the BLM needs to have a variety of options available to properly manage them.

Protect The Harvest has been a steady advocate for the multiple use of Federal lands s
ince its beginning.In 2017, Protect The Harvest arranged the purchase of twelve fillies from the BLM Wild Horse and Burro facility in Burns, Oregon. These fillies were spayed by a licensed veterinarian and handled for 30 days before being sold at the Reno Snaffle Bit Futurity that fall. The fillies and their trainers had the year to train in all three disciplines associated with reined cow horse and then went on to compete in the inaugural Wild Spayed Filly Futurity. Since then, 11 additional fillies were purchased and spayed and sold at the 2018 Reno Snaffle Bit Sale and competed in 2019. .

The goals of the Wild Spayed Filly Futurity are two-fold:

To help find economical, safe solutions in controlling the numbers of horses on American rangelands by demonstrating that the standing surgical spay is a viable, humane option for population control.

To showcase the significance and abilities of these resilient, tough and beautiful horses. It will also demonstrate their trainability and hopefully encourage more people to consider adopting a horse from our American rangelands.