SOCIAL COMPASSION IN LEGISLATION FOR ANIMALS 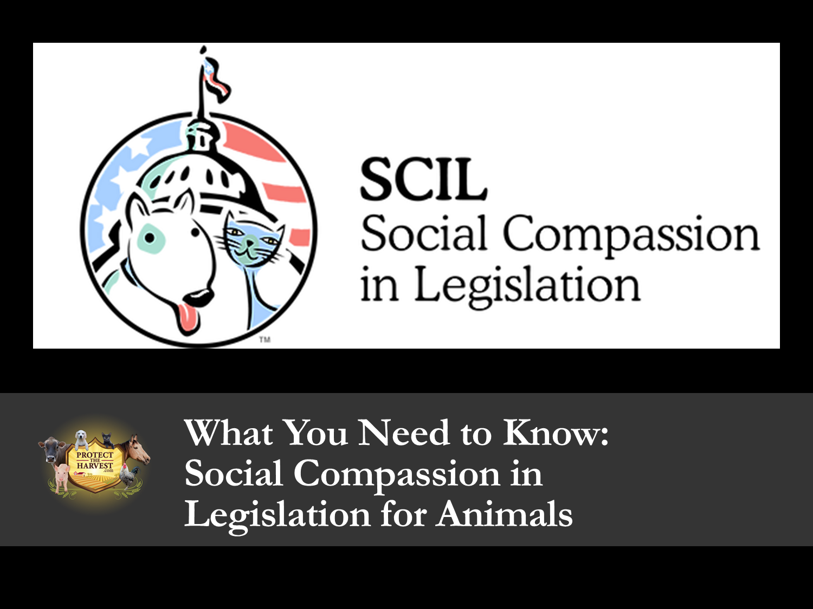 Social Compassion in Legislation for Animals

Located in California, Judie Mancuso and Social Compassion in Legislation for Animals (SCIL) have been pushing anti-animal ownership laws since 2007. With strong ties to animal extremist groups like PETA, the group has pushed bills like AB 2177 (anti-horse racing) and AB 1634 (mandatory spay and neuter of dogs and cats). Social Compassion in Legislation for Animals has used boiler plate language on topics like these and many others to push their ideology and agenda into other states across the country.

Political animal extremist groups like Social Compassion in Legislation are who many Californians look to for animal rights leadership. It is important that we stay educated about who we trust and we need to ask ourselves if what they are doing is really in the best interest of the animals?

SCIL’s work is especially harmful due to their ability to push legislation through their PAC (Political Action Committee) sister organization. The PAC allows them to support lawmakers who share their same radical beliefs and makes it easier to turn harmful, ideologically driven bills into laws.

The Social Compassion in Legislation website displays an inviting color scheme and a description full of seemingly good intentions. When we dig a little further into the campaigns this organization promotes, an agenda is revealed that most animal owners should think twice about supporting. SCIL has promoted more than 50 harmful laws and passed 18 that affect both animals and animal owners in the state of California. They have plans to write, fund, and promote even more in the near future.

Over the years this group has done a lot of damage and currently SCIL has successfully pushed 18 bills into law. These bills are harming the animals in California exponentially.
The California Animal Blood Bank Act (AB 1282) is an example of legislation which is harmful to pets and pet owners across the state. This new law will put a stop to animal blood banks which have saved the lives of many California pets over the years.

Dr. Jean Dodds’ organization, Hemopet, is directly in the crosshairs. Hemopet has done a great service for many dogs, and not just the ones receiving blood transfusions and other related lifesaving products. The nonprofit has provided countless retired greyhounds with a short-term home at the facility where they receive excellent care while they are providing lifesaving blood to treat sick animals. After their short-term service at the blood bank, these dogs are then placed in loving, lifetime homes.

SB 313 prohibited the use of wild animals in circuses. Their disinformation campaign falsely claimed that these animals (elephants, bears, lions, etc.) were being tortured by their owners. Performing animals are valuable partners and their care and wellbeing is of utmost importance to their owners. The entire campaign was skewed to promote animal extremist ideology that animals should not be in human care. The campaign intentionally left out information about the care the animals receive during, and in-between performances. It also left out critical information about species conservation.

Environmental Extremism – Save Our Coastline Act

Currently, Social Compassion in Legislation has several animal and environmental extremist bills they are pushing. “The Save Our Coastline Act” has a great name but is misleading. A better name for this should be the “Harm Our Nations Oil Supply Act.” If enacted to law, this legislation would cause the removal of all oil and gas leases in the tidelands by 2023. This legislation seeks to terminate one of the United States’ largest oil and gas sources that help to power our nation.

Their new wave of radical bills has branched out from simply targeting animal ownership — which has been their primary focus since their start — and moved to pushing their ideologies onto our children. The Child Nutrition Act (AB 558) would require schools in California provide plant-based meals for students. Not only does this further harm the future of animal agriculture by taking away a major consumer of their products (schools), but it also helps to normalize and push these extreme animal and environmental beliefs on future generations.

This organization has had its fair share of failed lawmaking attempts. As an example, they partnered with PETA to push anti-horse racing legislation (AB 2177). This legislation aimed to make horse racing in California almost impossible by adding a seemingly endless list of guidelines. These guidelines were so restrictive they would actually harm the welfare of racehorses by prohibiting administration of proper medications.

AB 1634 was an attempt to force all California dog and cat owners to spay or neuter their pets. The consequences of not complying would have been the seizure of the pet and forced sterilization. In the last decade, the veterinary industry has been taking a close look at the impact of spaying and neutering pet health. This is especially the case for early spay-neuter procedures and the debate is ongoing. The decision to spay or neuter a pet must be made by its owner and veterinarian, not by an arbitrary law pushed by animal extremist groups vying to end animals in human care.

The Smart Climate Agriculture Act, or AB 2653, was an open stance against the future of agriculture. The group claims they were promoting new, “green” plant-based farming while getting rid of a “dying” agriculture industry. Their “dying” industry is what puts food on the table of every American including themselves. Thankfully, all of these bills have died. However, we may not always be this fortunate the next time around.

Faces Behind the Organization

The Founder of Social Compassion in Legislature is an outspoken vegan who has strong ties with extremist groups much like her employees. Not only does she outwardly support organizations such as PETA, but she is also heavily supported by them. PETA has even praised her and SCIL’s work in articles. PETA’s 2019 piece, “Historic Victory for Animals: Three Wide-Ranging Bills Are Now State Law” praised her work in helping to ban circus’ — a family friendly pastime— in California. Mancuso is also serving on the City of Laguna Beach Environmental and Sustainability Committee as the vice chair. She spent two terms as a public member of the California State Veterinary Board where she pushed her boiler plate animal extremist agenda.

Standing as the Vice President of Communications at SCIL, Reyes is a country singer from New York who has been known to take stances against rodeo, hunting, and even barbecues. She also has openly stood with animal extremist organizations like PETA, going as far as taking her clothes off for their “Rather Go Naked” campaign.

As the Director of Legislative Affairs for SCIL, Sackett is a litigation lawyer turned animal and environmental extremist. He has openly showed his support for several extremist projects while using hot button words like “gaslight” to promote the separation in beliefs and create a greater divide. He has shown his outward support for radical animal extremist groups like Direct Action Everywhere. He also has supported bills like AB 416 (California Deforestation-Free Procurement Act).

Maggie Q is an actress known for her work in the television shows Nikita and Designated Survivor. What most people do not know about her is her affiliation with both animal and environmental extremist groups. She has joined PETA on several occasions to speak out against the fur industry and climate change; both of which she endorsed using boiler plate disinformation statements. She can often be found speaking about her vegan lifestyle and using it to promote her animal and environmental extremist beliefs.

Louis Linton is a board member at SCIL. Linton is a self-proclaimed anti- Zoo, vegan. Linton has a seemingly never-ending list of animal extremist organizations that she openly supports: PETA, Farm Sanctuary, The Humane Society of the United States, the Nature Conservancy, the Environmental Defense Fund, Ocean Conservancy, Austin Pets Alive, Wild Aid, Born Free, The White Coat Waste Project, and the list goes on.

It is become glaringly obvious that the future of animal ownership is in danger. Groups like Social Compassion in Legislation for Animals do more harm than good. They will continue to push extreme legislation that impedes the rights of animal owners and the welfare of animals as long as they are supported. We urge people to look into the groups they are supporting. As a part of this, we have resources on our website with information about animal and environmental extremist groups and their activities; they can be found under our What You Need to Know section.

It is important that we look into the people creating, mandating, and pushing for our laws, especially pertaining to our pets, livestock, land use and property rights.

Information about Humane Society of the United States HERE

Warning to Parents about Vegan Diets for Children HERE

Information about the Sierra Club HERE

Information about the Nature ConservancyHERE

Information about the implications of the circus ban HERE and HERE